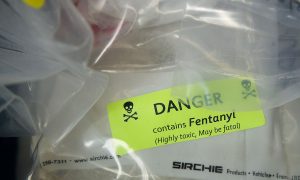 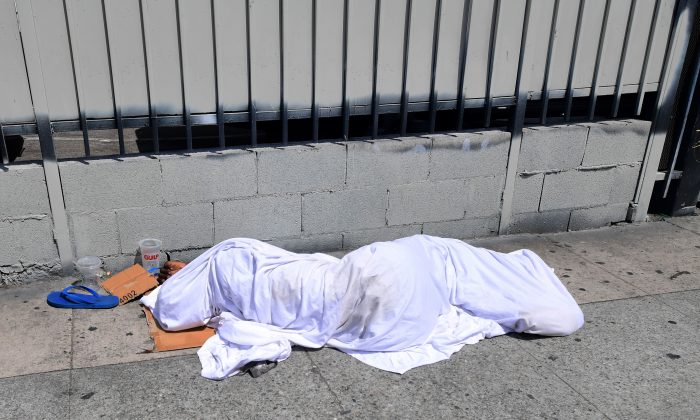 A homeless person sleeping under sheets along a sidewalk in Los Angeles on Aug. 22, 2019. (Frederic J. Brown/AFP/Getty Images)
Southern California

In a town hall meeting held in Laguna Beach, Calif. on Aug. 24, Orange County lawmakers addressed a crowd of roughly 50 concerned citizens about the growing issue of homelessness in the county.

“We are trying to take care of these 6,900 [homeless] people here. But people [want to] come here because of the weather, especially in places like New York because in the wintertime people cannot really stay outside, but here they can,” she said.

The state of California hosts 25 percent of the nation’s homeless population, with Los Angeles and San Francisco facing increasing numbers in recent years.

According to the Greater Los Angeles Homeless Count, the population of homeless in the County of Los Angeles stands at 58,936, as of June.

Of that, 14,722 are sheltered and 44,214 are unsheltered. The population has seen a 12% increase since last year. Reports of typhoid fever and now warnings of a potential outbreak of bubonic plague have been additional points of concern for Southern California residents.

Orange County, while having a significantly lower homeless population, stands at 6,860 as of April. According to the Orange County Register, this is a 43 percent increase from 2017’s total of 4,792 homeless. This has become concerning for residents and policymakers alike.

“There is a huge nexus between mental health, behavioral health and homelessness,” said Bartlett. “We are building out a 60,000-square foot mental health ecosystem, or campus, in the City of Orange. It’s going to be a complete lockdown facility. We hope to have three of them: one north, one central, one south.”

Bartlett said the plan was inspired by the fact that there aren’t enough in-hospital mental health beds, and hospitals in Orange County are overwhelmed. The facility will be open to anyone in the county, regardless of whether they are homeless or have an insurance plan.

“[The hospitals] are getting inundated in their ERs. If you are in a head-on accident and you’re going to Mission Hospital, and you’ve got a lot of homeless that are taking up space in the ER and they’re getting triage, the poor person in the ambulance is getting diverted to another hospital that might be 7 or 10 minutes away, so it’s putting people’s lives at risk,” she said.

For this reason, the county has set up a public-private partnership with hospitals and CalOptima, the county organized health system, to fund the new facility. The county has invested $16.6 million for the $40 million project, while CalOptima has contributed $11.4 million.

The Epoch Times also spoke with Bartlett’s counterpart Supervisor Steel on the issue of the growing homeless population and its related issues.

“Two years ago, the County [surveyed] a portion of the [population] and [multiplied] the number to an estimated amount. It wasn’t really an accurate or clear number,” said Supervisor Steel, referring to the homeless count in Orange County.

“This year they had a different method. For two nights, person by person, they [surveyed the homeless population]. So, this number is much more accurate.”

Steel explained that most of the blame of the growing homeless population lays at the feet of California’s legislators and their policies.

“The state’s obfuscation of responsibility on public safety, court rulings make it very difficult to get people off the street. They keep on failing to address mental health in California. They neglected that,” Steel explained.

Steel said that while local law enforcement are doing their best to prevent criminal homeless people from endangering local communities, state laws have made it difficult.

“AB 109 transfers state prisoners to local jails, while Proposition 47 and 57 reduces sentencing and theft up to $950. You don’t go to jail. These [laws] actually create more cases of petty theft, drug possession and shoplifting. At this point, the Sheriff’s office and local police are doing a great job up to what they can do. It’s just really tough,” she said.

Steel also addressed that while most homeless people claim to be from Orange County, there have been indicators that some may be led from out of the state. She pointed out a flyer that a colleague of hers saw in New York encouraging homeless to come to Southern California

“One of my friends went to New York and he saw a flyer saying that if you’re homeless, go to Orange or LA County, California. The weather is good and you’ll get all the full services as long as you say that you are a resident of that county.”

Steel said that in the February count, 73 percent of homeless people said their last permanent address was in Orange County, and only 21 percent were from outside the county.

The Be Well Orange County Regional Mental Health and Wellness Campus is slated to open in the spring of next year, and residents hope it will be able to significantly help address the mental health issues of Orange County’s growing homeless population.