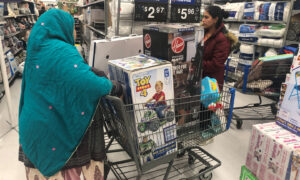 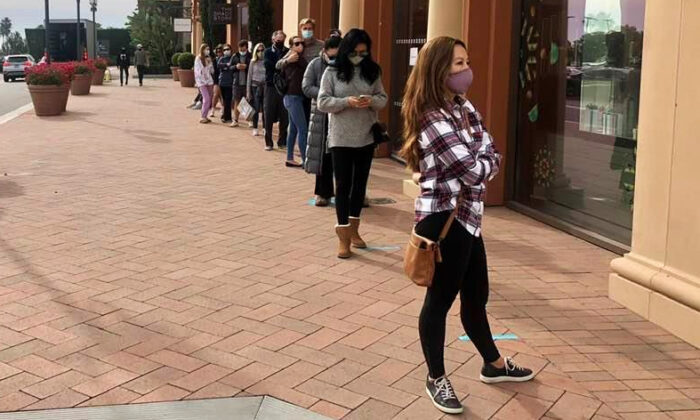 The scene at three local malls—South Coast Plaza in Costa Mesa, Fashion Island in Newport Beach, and the Irvine Spectrum Center—appeared to reveal a more restrained approach to in-person perusing as the holiday neared.

At the Irvine Spectrum Center, where tall palm trees and a Ferris wheel mark the outdoor mall’s expanse between the 5 and 405 interstate freeways, the crowd was light on Dec. 22.

For ­­28-year-old Cynthia Huelitl, who works in the center, conditions were ideal for making a quick stop at the mall’s Target to meet her Christmas shopping needs.

“It’s not a whole lot different,” said Huelitl, when asked by The Epoch Times to compare this Christmas shopping season to previous years.

“I feel like people are still coming out and shopping. You just have to be quicker in your shop time, planning ahead more,” she said.

“I definitely try to do [more] online shopping or I try to do a ‘pick-up in store,’ but when that option is not available I’ll pop-in after work and see if I can grab something right from the store.”

At Fashion Island in Newport Beach, 62-year-old Dean Lindsay, who has been running a Gourmet Hot Dogs stand for the past 29 years, said he’s noticed a different attitude among patrons this year.

“There’s fewer people in the mall, but they are glad to be here because we are an open air mall,” Lindsay told The Epoch Times Dec. 23.

“There’s a lot of people who have had cabin fever, so they are happy to get out and about. People are more appreciative this year to be outside [and] to be out shopping. They’re not taking anything for granted.”

Lindsay said his wife does all the family’s Christmas shopping. She has increased her online gift buying, he said, but “still gets out there in the mix.”

At South Coast Plaza in Costa Mesa, a longtime fixture in Orange County and the largest shopping center on the West Coast, long lines were seen Dec. 23 at some big name stores like Chanel and Williams-Sonoma. But that wasn’t the norm for most of the indoor mall, which appeared to have plenty of elbow room for shoppers.

Online shopping, combined with the nation’s economic reality due to the ongoing COVID-19 pandemic, have adversely affected in-person purchases, according to experts.

Raymond Sfeir, director of the A. Gary Anderson Center for Economic Research at Chapman University in the City of Orange, said shoppers were less likely to go to brick-and-mortar stores to do their Christmas shopping this year.

“I wouldn’t be surprised if national retailers have sales more than 30 percent [less] than last year because of people switching to ordering online,” Sfeir said when the holiday shopping season began last month. “This will be at the expense of stores and malls.”

The rise in COVID-19 “will scare people from going to the mall. I don’t think the malls will do very well this year,” Sfeir said.

He added that Orange County would be particularly hard hit because of the economic impact of shutdowns in the tourism and leisure industries.