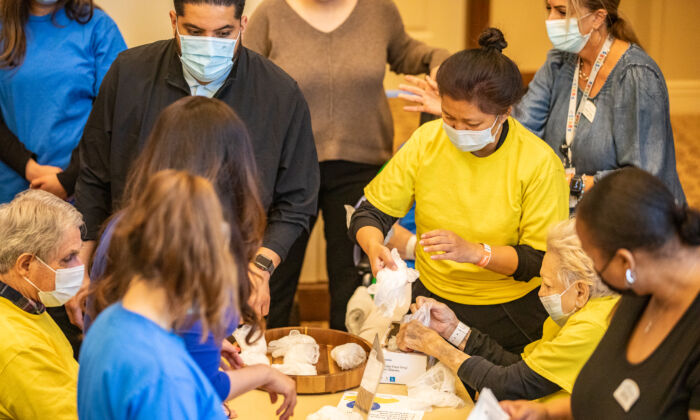 RANCHO MISSION VIEJO, Calif.—More than 6,000 miles away from the battlefields of Ukraine, a group of seniors helped create first-aid kits on March 15 to be delivered to the country.

Clad in the national colors of Ukraine with blue and yellow tee shirts, the participants residing at The Orchards Health Center, an assisted-living community, in Rancho Mission Viejo, California, were writing messages of encouragement to the victims of war and, at the same time, assembling first-aid kits that would then be shipped on the same day through Meest-America, Inc.—an international humanitarian organization—who will be transporting the aid supplies to the Red Cross in Ukraine.

“Once our first-aid kits are loaded, they will be sent to Glendale to then be transferred to Ukraine,” Orchard Health Center Administrator Kelly Conk told The Epoch Times.

“Our residents here at Orchard have had a life of helping others and they are not stopping now.”

Above them on top of a fireplace mantle rest a sign that read, “We stand with Ukraine.”

“We are hoping to do more of these events [with] the residents and staff in the near future when the opportunity is given to us,” Conk said.

“We are excited as our box of first-aid kits heads off to Ukraine today.”

Standing near the box was Orchard resident Ron Lackie, who was helping to load the completed first-aid kits into the box.

“This event makes me think about the other ones I have seen over the years,” Lackie told The Epoch Times. “And today I wanted to volunteer for this because when people need help, I help.”

As the group completed their kits, some of them clapped before being helped up by medical staff to head off for the next item on their agendas.

Since the Russian invasion began on Feb. 24, the Office of the U.N. High Commissioner for Human Rights verified 691 civilian deaths as of March 14, with 48 of them being children.

With most refugees heading to the county’s Western border to escape the conflict, Poland has recorded the highest number of refugees, totaling more than 1.8 million people.

“[We] liked being able to help with this today here,” Lackie said.

“The world is short on volunteers.”