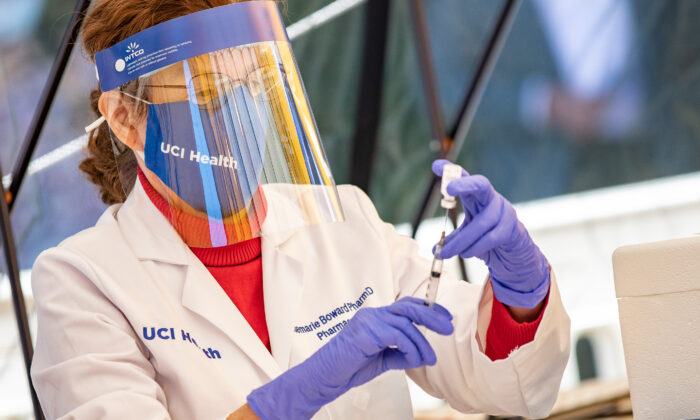 SANTA ANA, Calif.—Orange County’s COVID-19 hospitalizations and other metrics continued to decline today, but eight more deaths have been logged, including six this month.

The number of coronavirus patients in county hospitals decreased from 367 on Friday to 309 Monday, with the number of patients in intensive care falling from 108 Friday to 100 Monday, according to the Orange County Health Care Agency (OCHCA). The OCHCA reports COVID-19 statistics Mondays through Fridays.

The county’s positivity rate as of Monday was 3.7 percent and 4.2 percent in the health equity quartile, which measures the disadvantaged communities hardest hit by the pandemic, according to Orange County CEO Frank Kim.

That compares with last Monday when it was 4.7 percent positivity, 5.1 percent in the health equity quartile, with a case rate of 13.5, Kim said.

“It looks like we got through it,” he said.

Weekly averages, released on Tuesdays, showed last week that the county’s case rate per 100,000 residents dropped from 16 to 15.3, while the testing positivity rate fell from 5.4 percent to 4.7 percent.

The eight fatalities logged since Friday raised the cumulative to 5,352 since the pandemic began.

Those figures stand in stark contrast to the rest of the summer.

The OCHCA also reported 1,031 new infections since Friday, raising the cumulative total to 293,875 since the pandemic began.

That number includes an increase from 1,908,595 to 1,932,614 residents who have received the two-dose regimen of vaccines from Pfizer or Moderna. The number of residents receiving the one-dose Johnson & Johnson vaccine increased from 135,098 to 136,514.

There are 220,138 residents who have received one dose of Pfizer or Moderna vaccines.