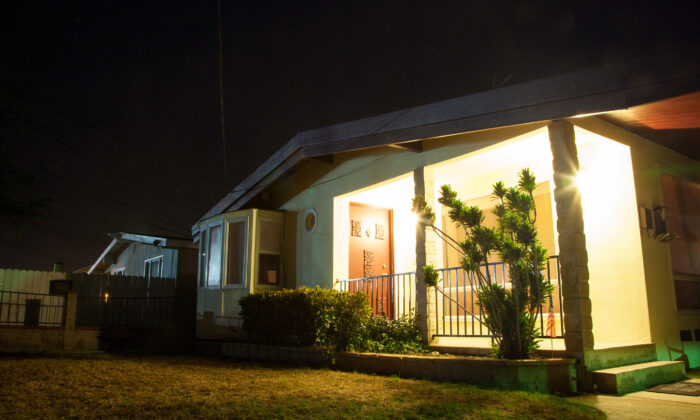 A file photo of a home with porch lights on in Culver City, Calif. on Aug. 5, 2015. (John Fredricks/The Epoch Times)
Viewpoints

Communities think that renewable energy providers like Orange County Power Authority (OCPA) are altruistic and all about increasing everyone’s renewable energy use. What is missed is that many of these energy procurement agencies are more about separating you from the green in your wallet than greening the environment.

This 3-part article, which includes action items you can take at the end of Part III, discusses how consumers are misled by community choice programs—like OCPA—and their organizers and consultants, paying for renewable energy that is never delivered to their homes and businesses.

OCPA forces its way into the market and into your finances by automatically switching unaware consumers into its program amid dramatic claims of providing enormous amounts of renewable energy, inexplicably accomplishing what California’s electric system and best engineers have never before achieved.

After only a few weeks of business sales, OCPA gushes (pdf) that it is “the greenest or one of the greenest electric providers in the nation,” exposing leadership’s ignorance and hubris. [1]

There is much manipulation and technical interpretation of data as renewable energy volumes and greenhouse gas numbers are reported to a generally naïve public that willingly consume the agency’s propaganda without question. OCPA capitalizes on reporting loopholes and flaws in California’s energy system that is rigged against consumer transparency.

State energy law exempts OCPA and many of its sister community choice agencies from energy audits for three years—plenty of time for these agencies to engage in the appearance of delivering clean energy to your home or business while banking ill-gotten money in their reserve accounts. [2]

You will never see an “OCPA” service truck or receive an “OCPA” electricity bill.

Created by state law, OCPA and its sister community choice energy agencies are little more than trading houses that insert themselves into the electricity procurement business, the riskiest part of the power industry. Commodity price swings can quickly put community choice into bankruptcy, per OCPA predecessor Western Community Energy in 2021.

OCPA buys renewable energy from a European oil company—Royal Dutch Petroleum—which smacks of “clean” contradictions as well as the agency’s claim of redirecting money back to the local Orange County community.

The agency contracts with many of Edison’s electricity wholesalers, duplicating what is already achieved.

OCPA is organized as a joint powers authority of local towns and cities that each assume up to $1 billion dollars of energy contract liability. [3] The agency is run by politically connected leaders and consultants.

OCPA hides in plain site after switching (slamming) consumers from Edison into its energy program with its controversial opt-out feature that has already been used to enroll Orange County’s commercial and industrial ratepayers, and will be used to enroll residential consumers in October.

Edison is legislatively required to bill customers on behalf of OCPA and deliver the agency’s power over its own lines. OCPA attaches itself to Edison’s underbelly where it operates, unchallenged, because a state-enacted gag order prohibits Edison from talking about the agency’s merits or technical shortcomings.

OCPA’s 100% Renewable and Smart Choice (69% renewable) option reveals an absence of understanding of electricity’s physics and of California’s power grid, evidenced by the agency’s renewable energy volumes that dwarf reality. [4]

How does OCPA achieve the impossible?

It doesn’t. That reality and the resulting danger threaten to turn California’s energy system into chaos, where blackouts are the norm, resembling a third-world country. This occurs as OCPA leaders push for the retirement and dismantling of power generation facilities that once made California’s electric system stable and reliable, a downfall that will reveal itself over the coming years.

Part II of this series discusses OCPA’s over-promising and under-delivery of commitments, and how much of the renewable energy arriving to the California energy grid never makes it to your home or business.

[1] OCPA board chair Mike Carroll at April 5, 2022 board meeting: “But I just wanted to say what really jumped out at me, other than all the detail and the sheer breadth of the fact that we’re going to be, or that we are, the greenest or one of the greenest electric providers in the nation… which is really fun as that rolls off the… rolls off the tongue.”

[3] OCPA reported at its September 4, 2021 board meeting that its credit line financier, MUFG (Union Bank) was restated that OCPA’s individual member cities not be able to walk away from their Joint Powers Authority liabilities, including energy contract liability, should they desire to depart from the program. Those liabilities, including a member’s involuntary termination, are also referred to in the Joint Powers Agreement §6.2 and 6.3.