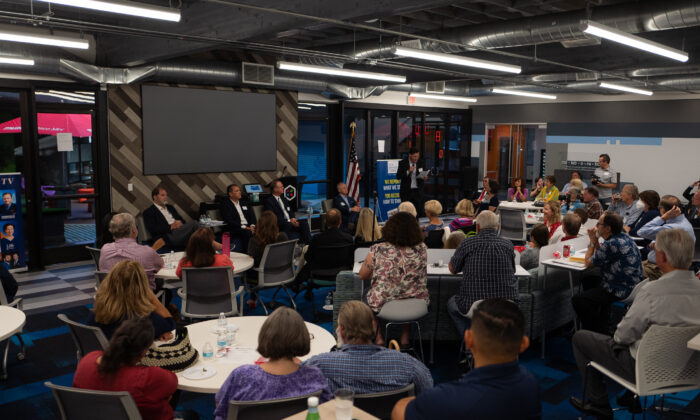 TUSTIN, Calif.—Former and current Orange County officials took part in a panel discussion Aug. 11 to talk about the history of alleged corruption in Anaheim and potential solutions to government problems caused by major business interests in California.

The leaders discussed ways to avoid conflicts of interest in government agencies following an FBI affidavit released in May against Anaheim’s former Mayor Harry Sidhu and the director of the local chamber of commerce.

Sidhu—who has not been criminally charged or indicted—was accused of corruption in the city’s $320 million deal to sell Angel Stadium to the owner of Angles baseball team Arte Moreno. The city council voided the sale following the FBI report.

Disneyland Resort is also suspected of being a part of the special interests accused by the FBI of steering the city’s politics.

Residents of Anaheim, a city blessed and troubled by its thriving entertainment industry, attended the panel hoping to find out more about the allegations and potential solutions.

“I wanted to see what they were going to cover and what kind of suggestions they had,” Cynthia Ward told The Epoch Times. “It’s a huge, huge problem here. It was nice to see so many people from other cities paying attention and realizing they hadn’t heard a lot of this. That was scary to me because I thought everybody was watching this. This is coming to their cities, too.”

During the panel, Moreno said he felt that many of the city council’s decisions were predetermined even before public discussions.

“It’s very clear on our council, and other councils I watch, the decision is already cooked and baked,” Moreno said.

Moreno proposed last month a set of new rules to prevent special interests from affecting the city’s decision-making process—including requiring city councilors to excuse themselves from voting on any measures that would benefit their campaign donors and disclose any contribution of more than $250 received in the past 12 months. The city council did not pass the measure.

Moorlach, the county’s former supervisor and treasurer-tax collector, shared his thoughts on how campaign donations could easily influence local decisions because “[e]verybody’s focused on their own self-interest. That’s just human nature.”

Something’s going to break, he said.

Tait, the former mayor, said one way for public officials to avoid conflicts of interest in the future would be to ask themselves if their decisions were in the best interest of the people they represented.

Instead of corporate subsidies, investing in immigrant-owned businesses and mentoring the younger generation in entrepreneurship can be effective ways to improve Anaheim and cut down on cronyism, according to Tait.

“What does work is entrepreneurism and small business,” he said.

Political consultant Matt Holder, of Holder Public Affairs Consulting in Irvine, said bringing people together was one solution to corruption.

“Corruption knows no party lines,” Holder said at the panel. “Opposing corruption has no party lines. Both parties are susceptible to crony capitalism and corruption. The solutions come from bringing together of Democrats and Republicans, conservatives and liberals.”

Anaheim native Rebecca Flynn-Jones and her husband Wesley said they are active participants at city council meetings and have followed the stadium deal.

“I really appreciate everybody who spoke tonight. It was good,” Wesley Flynn-Jones said.

“We wish that more people were more involved and that they would be more willing to come and follow what’s going on,” Rebecca Flynn-Jones said.

“The actions of some individuals that occurred outside of normal city business and processes were reprehensible, and understandably challenge the public’s trust,” O’Neil said. “Anaheim, however, remains strong, with a robust economy and a balanced budget.”