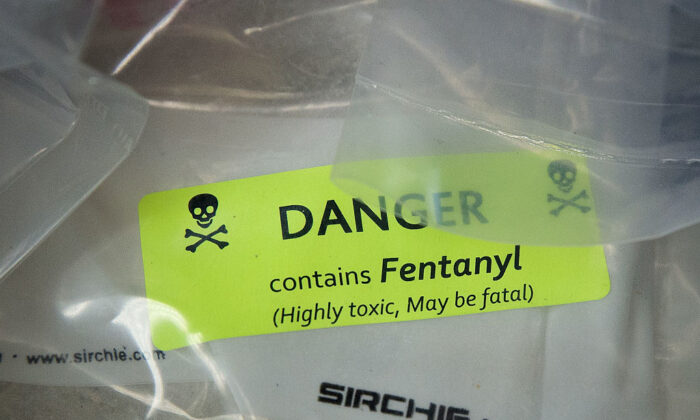 Bags of heroin, some laced with fentanyl, are displayed at the office of the New York Attorney General in New York City on Sept. 23, 2016. (Drew Angerer/Getty Images)
Southern California

As the fentanyl epidemic leads hundreds to an early death each year in Orange County, the county’s Board of Supervisors vowed, during a Jan. 25 meeting, to stand with law enforcement to combat the threat of fentanyl.

“In our community, we lost a young man and his girlfriend. … They thought they were taking Xanax,” Supervisor Katrina Foley said. “They ended up dying in each other’s arms, and my friend, their mom, found them asleep.”

The resolution—passed unanimously by the board—to join forces with the Orange County District Attorney’s Office and the Orange County Sheriff’s Department to fight fentanyl is anticipated to gain traction as the pressure to get support from state officials lingers.

In California, fentanyl deaths persist as state law does not penalize fentanyl trafficking with the same weight as that of cocaine, according to Supervisor Don Wagner.

“We are seeing an explosion of fentanyl out in our community, and, with it, fentanyl deaths,” Wagner said.

He highlighted the number of drug deaths nationwide—over 100,000 recorded—between April 2020 and April 2021.

In Orange County, drug deaths have increased by over 1,100 percent in the past five years, according to Wagner, and 388 pounds of fentanyl were seized by the sheriff’s narcotics team between 2017 and 2020.

As the 2021 reports conclude, fentanyl deaths continue to increase in the county, with 512 cases confirmed and 402 cases pending, according to Orange County Sheriff Don Barnes.

The first fentanyl recognized by an Orange County crime lab was identified in 2016.

“I saw that as the beginning of a trend that manifested into a significant risk,” Barnes said. “If not for COVID, the public health crisis we would be dealing with nationwide would be the fentanyl epidemic.”

Fentanyl, a silent killer, can be sneaked into several types of drugs. Pharmaceuticals purchased on the black market for anxiety or depression can be secretly laced with fentanyl.

To raise awareness of the hidden threats, the Drug Enforcement Agency launched the “One Pill Can Kill” campaign, which provides educational materials for individuals and community organizations to raise awareness of fake prescription drugs through posters, presentations, and social media.

Besides monitoring drug trafficking throughout the county, the sheriff’s department has been prioritizing and countering the fentanyl crisis through various measures.

The “Above the Influence” program created by the sheriff’s office targets teenagers, highlighting the risks of not making good choices and providing resources to help them overcome negative pressures in life.

In addition, a task force is being formed, Barnes said, to determine the cause of homeless deaths, which can provide a better understanding of fentanyl’s impact on the homeless population.

A nasal-spray antidote that can reverse the effects of narcotics is being utilized by law enforcement on people in life-threatening situations, according to the sheriff’s department.