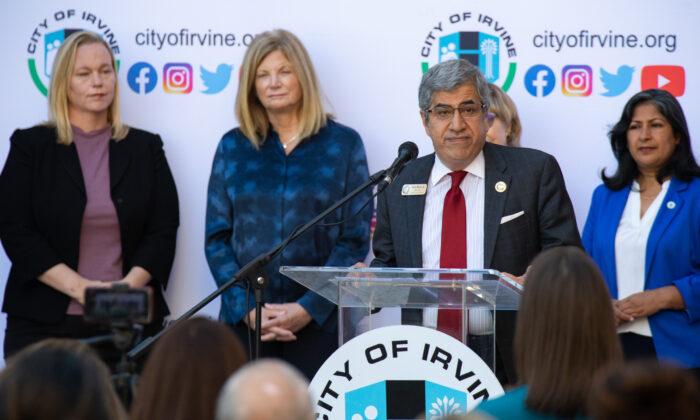 IRVINE, Calif.—Various Orange County mayors came together at the Irvine City Hall Nov. 15 to show their support for the passing of a $1.2 trillion federal infrastructure and jobs bill.

President Joe Biden signed the Infrastructure Investment and Jobs Act (pdf) on Nov. 15, which will deliver $550 billion of investment into the country’s infrastructure over the next five years, including bridges, roads, water and energy systems, and broadband access.

“We all know how great the need has been at the local level, and with this investment, we are ready to deliver,” Irvine Mayor Farah Khan said at a press conference.

The state of California as a whole is set to receive $25.3 billion for federal-aid highway programs, $4.2 billion for bridge replacement and repairs, and the ability to compete for the $12.5 billion Bridge Investment program for economically significant bridges, and close to $16 billion of national funding for major projects that give economic benefits to local communities.

California will also receive a minimum of $100 million for broadband coverage throughout the state, Khan said.

Irvine will be using its portion of the funding to prepare a “complete streets plan,” that will work to accomplish the city’s active transportation plan, transit vision study, and a trail feasibility study, which will allow the city to identify priorities across different modes of transportation for all road users.

“This comprehensive plan will identify priorities across the different modes of transportation based on factors such as safety for all road users, increased transportation choices, economic revitalization, livable communities, public health, and greenhouse gas reductions,” Khan said. “Currently, we’re set to review our broadband infrastructure to locate gaps throughout the city. With additional funding, we will not only be able to provide quality internet service to all our residents and businesses, but also provide affordable options.”

“[This bill] will bring good-paying jobs to the people of Orange County, smoother roads, faster internet, less traffic, clearer water, and greener energy,” Traut said. “The people of Orange County, through their elected leaders, stand in lockstep with the goals for these federal dollars to begin flowing quickly, directly into local communities and decisions to be made by local governing bodies, for it is the cities who know their own needs.”

“This is a moment bigger than any one project, than any one city. Today marks a moment of progress for equitable investment into the infrastructure that keeps us all moving forward.”

The move to improve roads comes as the state received a “C-” grade on its infrastructure report card by the American Society of Civil Engineers due to 14,000 miles of highway in poor condition, which the White House says is due to a lack of investment.

After giving support for the current bill, Sarmiento also said he is looking forward to more bills from the Biden administration.

“I’m excited about all that we’re going to be doing here together working as a group to improve many, many lives. This is the first part of some of the administration’s bills. We still have an opportunity to get the Build Back Better bill done. What that does is it invests not just in traditional infrastructure, but invests in human capital.”