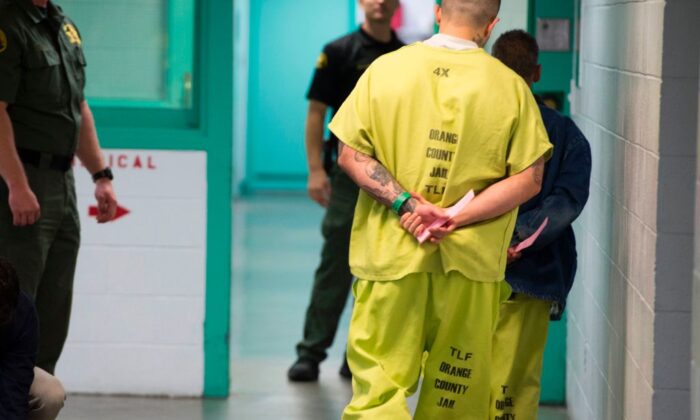 An Orange County, California, man suspected of murder has become the first person to die from COVID-19 while in county custody.

Eddie Lee Anderson, 68, died Dec. 18, about a week after testing positive for COVID-19. The Theo Lacy Facility inmate was transferred to a hospital on Dec. 13 for treatment.

Anderson was arrested in 2019 in connection with the 1976 strangulation of 30-year-old Leslie Penrod Harris, who disappeared after leaving a Costa Mesa restaurant on May 17, 1976. Her body was discovered the next morning. Police have credited DNA with helping them crack the 43-year-old case.

According to a statement released Dec. 18 by the Orange County Sheriff’s Department, 1,260 inmates have tested positive for the virus since the beginning of the pandemic. The sheriff’s website indicates there are currently 626 inmates with the disease.

The COVID-19-related inmate death came as Sheriff Don Barnes was appealing a court order to release 50 percent of inmates in custody at county jails. The order followed a spike of positive COVID-19 cases in the facilities.

In a Dec. 11 lawsuit filed by the American Civil Liberties Union (ACLU), Judge Peter J. Wilson ordered Barnes to release approximately 1,800 inmates on behalf of those who claim to be at high risk of suffering complications related to the virus.

In a statement released on Dec. 16, the sheriff backed up his stance against releasing the inmates, saying it could have devastating consequences for public safety.

“If this ruling is allowed to stand it will potentially result in the release of individuals who have been charged with serious and violent crimes,” Barnes said.

The sheriff encouraged readers to push their community organizations—such as homeowners associations, chambers of commerce, youth groups, and more—to file an amicus brief in support of the sheriff and his appeal.

Barnes noted that his department will not be deterred by “one court ruling” and will use all of the legal options available to him to keep offenders out of the community.

Additionally, the statement said that people have asked the sheriff to release inmates who are considered medically vulnerable, which he noted he has done over the last several months for low-level offenders to serve the remainder of their sentence.

“This decision allowed us to mitigate the impact of COVID-19 on our jail system and preserve our ability to house dangerous offenders,” he said.

The Sheriff’s Department said it will continue to use regular testing, jail bed management, and correctional medical staff to mitigate the impacts of the virus in county jails.

“The COVID-19 pandemic is serious and presents a risk, but that risk does not outweigh the necessity of holding dangerous offenders in custody,” Barnes said. “We cannot start 2021 with a court-ordered crime spree.”