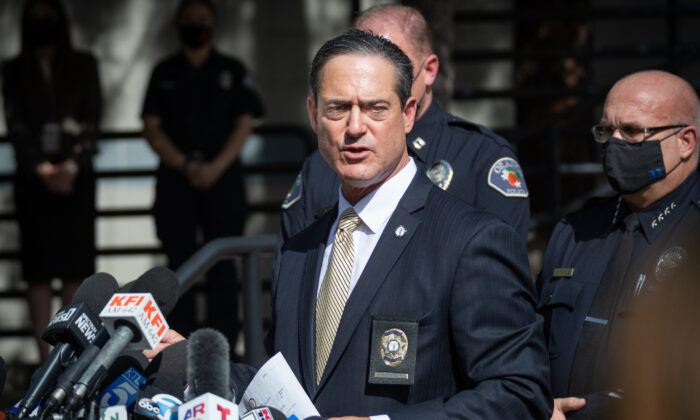 “We are not going to allow Sacramento to change our quality of life here in Orange County; we’re always going to fight,” Spitzer said.

“When we get our convictions, we have a 95 percent conviction rate. These traffickers—I’m talking about the pimps—they are going away for decades. We are locking them up forever. I’m proud of the fact we’re taking them off the streets and we’re actually breaking the shackles that these women have had to live under.”

The Human Trafficking Taskforce highlighted the $32 billion dollar industry in the United States, with 80 percent consisting of female victims and 70 percent male traffickers.

“Eighty-nine percent of the victims of child abuse in Orange County knew their perpetrator,” Strattman said. “It gives them a connection with somebody, and a trust is sort of built in there.”

Officials focused on sexually exploited children in the county, citing that prior abuse and neglect are a massive risk factor of exploitation, making youth more vulnerable to strangers they meet online.

In 2015, the number of exploited youths the Human Trafficking Taskforce found in Orange County was evenly divided between inside and outside the county. As time persisted and school officials received effective training, the calls for children in Orange County have increased while the calls from kids outside the county have decreased, Strattman said.

“These relationships can look to the untrained eye as a domestic violence relationship,” Wah said. “They keep going back to their abuser … because they believe that their trafficker loved them.”

Pending legislation in Sacramento, Senate Bill 357 threatens to legalize loitering with the intent to commit prostitution. If approved, the human trafficking task force will be nonexistent, an investigator at the press conference said.

“Why on earth would we condone that and legalize that?” an investigator said. “All we are doing is condoning the manipulation and the exploitation of our young girls … I trust that our DA and our legislation at least down in Orange County will support us on that. I’m not worried about being out of a job. I’m worried about our girls being victimized.”