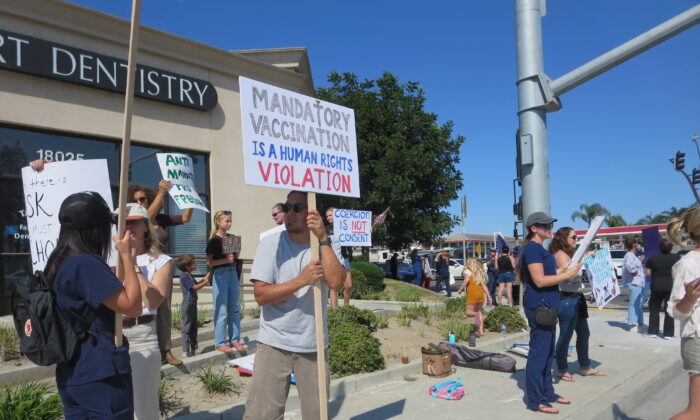 The California Department of Public Health issued an order in August requiring all health care workers to be fully vaccinated by Sept. 30.

A recently established organization, America’s Healthcare Workers for Medical Freedom, initiated this “Stop the Mandate Rally.” The rally took place near the intersection of Talbert and Brookhurst in Fountain Valley. The protesters at the rally consisted of MemorialCare workers, patients, and local residents.

Nicole Chou, a nurse who works at Orange Coast MemorialCare Medical Center, told The Epoch Times that she came out because the hospital announced in August that unvaccinated workers may be terminated. She mentioned that she got both doses earlier this year and she had suffered severe side effects following the vaccine.

“So basically, they are telling us that you have to get the vaccine, or you can possibly be terminated,” Chou told The Epoch Times.

“I noticed after I took the vaccine that I was having some severe headaches … I’ve had an issue with taste; certain things taste funny to me now.”

Chou said she would not consider getting a booster and emphasized that getting the vaccine should be a choice. Chou explained that she only got the vaccine because she wanted to protect her family and be a good example to her patients, adding that she thinks the vaccine should not be forced upon health workers by their employers or by the government.

Felicia Wafford, one of the protesters at the rally said she believes that people have the right to decide what to put into their bodies and said she is concerned about the side effects of the COVID-19 vaccine.

“We already know there are studies that show that it creates heart inflammation, blood clots. We don’t know what’s going to happen to your bodies. We know if it can create organ failure. … Is that going to affect fertility? We don’t know these answers, yet they’re mandated,” Wafford told The Epoch Times.

The Vaccine Adverse Event Reporting System (VAERS) is a safety monitoring program that helps to track adverse events following any vaccination, including deaths.

Since December 2020, VAERS received approximately 8164 cases of death and 1,541 reports of myocarditis or pericarditis among people ages 30 and younger relating to the COVID-19 vaccine as of Sept. 22, 2021, according to the Center for Disease Control and Prevention.

“Why I don’t agree with the vaccine is because when the state dictates what to do with our bodies, then this is a totalitarian. This is what China, and North Korea, Cuba, Venezuela, those countries do. They do whatever they want with the citizens,” Salvador Flores, a rally organizer and health care worker, told The Epoch Times.

Orange Coast MemorialCare was not immediately available for comment.