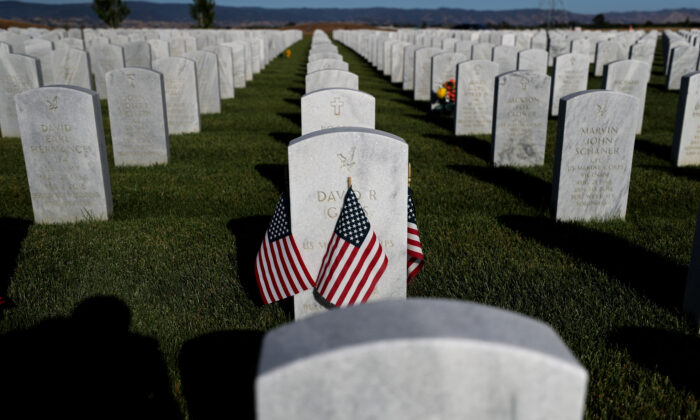 Orange County Finally Does the Right Thing for Veterans Cemetery

The conversation among Orange County residents about where to place a cemetery for veterans has been a political football for nearly a decade.

Utilizing the former El Toro Marine Base has been recommended for most of that time. But the logic of placing it there is based more on sentimentalism than fiscal reality. The base has a toxicity from decades of jet fuel and other related chemicals seeping into the ground. Reconstituting the land and making it suitable for burial plots would be expensive.

What to do? Well, to paraphrase Winston Churchill, “elected leaders will always do the right thing, only after they have tried everything else.”

This couldn’t be truer than the city of Irvine’s recent decision to place the Veterans Cemetery in a nearby Anaheim Hills area known as Gypsum Canyon.

Attempting to put the cemetery on the base has been an awkward and entangled story over the years.

While serving on the Orange County Board of Supervisors back in 2014, we were requested to endorse Assembly Bill 1453, by Assemblywoman Sharon Quirk-Silva. Since the proposed cemetery was not in the author’s Assembly District, I perceived it as a political stunt, using veterans as a prop to garner some media attention.

My now deceased father-in-law received the Purple Heart during his military service in the country of France during World War II. I was offended by the legislator providing a false hope to veterans. This was all the more so because my folks were liberated by American troops from Nazi occupation. I might not even be alive today if it weren’t for our nation’s brave veterans.

It would have been an honor to bury my father-in-law in a veterans cemetery closer to home. But I didn’t want him or his fellow comrades in arms to be pawns in some tacky political stunt.

At the time, California was in the worst fiscal shape in its history. The Great Recession had taken a heavy fiscal toll. So had pension and other post-employment benefit liabilities. I’d like to tell you things have improved, but that’s not the case. Our state’s balance sheet looks worse a decade later. And the Golden State is subject to the whims of the economy.

In a down economy, the state makes dramatic budget cuts, and its Department of Veterans Affairs (CalVet) is the usual suspect for major expenditure reductions. The two most recent veterans cemeteries pursued by CalVet are in Igo and Monterey. They’ve been fledgling efforts with slow construction timetables. As a new state senator, one of my first letters to an agency was to CalVet asking them to explain if they had the wherewithal to handle another new cemetery.

There are currently four nearby military cemeteries; two in San Diego County, one in Riverside County, and the fourth is in Los Angeles County (which is full). The need for something closer is there, but not critical, as we have survived with this situation for some time. While only 39 states have national cemeteries, Southern Californians are blessed with four within a reasonable driving distance.

The United States Department of Veterans Affairs is not in decent fiscal shape. A look at its financial statements finds a massive deficit. Expecting funds from this governmental source is overly optimistic, and getting them is highly unlikely.

I predicted back in 2014 that this project would take decades and said it should be managed by the Orange County Cemetery District.

Two things occurred in the meantime. The first was the gift of more than 20,000 acres to the County of Orange by Donald Bren and The Irvine Company. Receiving this amazing open space in the Santa Ana Mountains was an amazing gesture for a county that is only some 800 square miles in size.

The second was the gifting of a premium location by the Orange County Board of Supervisors to the Cemetery District.

In between, we saw more political posturing by the supermajority in Sacramento over the El Toro location by meddling legislators, including a joint visit by then-Governor Jerry Brown and Assembly Speaker Anthony Rendon. Setting unachievable expectations for our veterans was a sad ploy to witness.

In this case, after trying numerous other ideas, the city of Irvine and the County of Orange are finally doing the right thing. Partnering with the Orange County Cemetery District was and is the wisest fiscal move. And it has wide support from neighboring cities.

Gypsum Canyon will be an ideal location. As someone who has visited several military cemeteries in this country and western Europe, the Gypsum Canyon site will provide landscaping and views worthy of such a necessary and critical facility. Those visiting this site in a few years will be extremely pleased with the setting. And those driving by who catch a glimpse will be very proud.