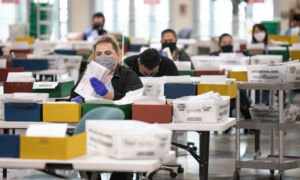 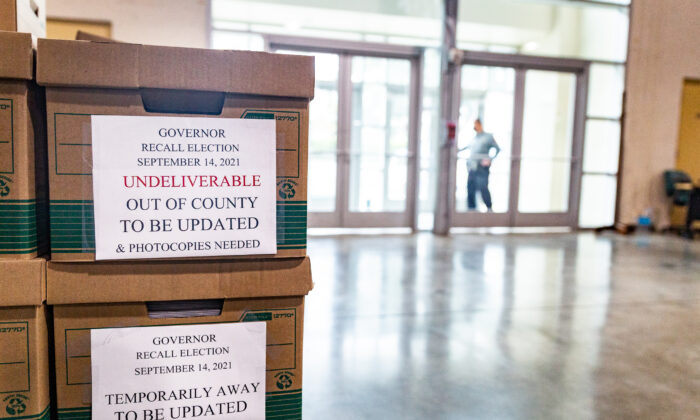 A citizen election observer has raised concerns over what she estimates could be as many as 100,000 “undeliverable ballots” returned to Orange County’s main vote center during the gubernatorial recall election.

The observer, who asked to go by the pseudonym Tracy Verdi, told The Epoch Times she estimates that “tens of thousands” and “maybe 100,000” undeliverable vote-by-mail ballots were returned to the facility in Santa Ana, Calif., in early September.

Verdi also claimed that observers were kept away from some aspects of the ballot-processing operation, and that in some instances, observers had to use high-powered binoculars to view the process. She said they weren’t allowed to get close enough to the operations to accurately monitor them.

Orange County Registrar of Voters (ROV) Neal Kelley denied the allegations, claiming that observers were given access and that the ROV has received “half that” amount of undeliverable ballots.

“This is nonsense,” Kelley responded in an email to The Epoch Times. “They had the same view as regular ballots. They were on camera when the ones that were processed went through our automated sorters.”

Though Kelley set up cameras to monitor different stages of vote processing “to make people feel like they’re observing,” Verdi said it’s not the same as up-close observation.

“He’s really turned observers into spectators and not true observers,” she said. “I’ve been a credentialed election observer in another state for congressional candidates, senator candidates, and gubernatorial candidates. I have never seen such a corralling of observers limiting their ability to truly observe an election than what I’ve witnessed.”

Though she stopped short of alleging election fraud, Verdi wondered why there were so many envelopes stuffed with empty mail-in ballots piled up in bins at the ROV facility. The envelopes weren’t postmarked or marked “return to sender,” she said.

In early September, observers asked election officials how many undeliverable ballots had been returned to the ROV over the course of the election. They were told “lots” because the Orange County ROV sent out over a million mail-in ballots, but they weren’t given a number, Verdi said.

ROV staff didn’t answer specific questions about how and when the undeliverable ballots were received, how they’re accounted for, and what eventually happens to them. They were told that requests to destroy “votable” ballots must come from the individual voter, Verdi said.

Observers were told that the ROV had “a special relationship” with the United States Postal Service (USPS), which holds the undeliverable ballots and takes them to the ROV when space is available, Verdi said.

But Kelley said Verdi is “incorrect and misinformed.”

“The USPS does not bring them to our facility. We pick them up, and the USPS does not hold any—we take them all. Some are marked return to sender, but most have the nixie labels (yellow labels) with either just plain undeliverable, or with the new address. Election mail (particularly ballots) are not forwardable and are treated differently than regular mail,” he said in the email.

Undeliverable ballots are treated like voted ballots that “go directly into our 24-hour secure caged area,” Kelley said. “There are not an unusual amount of undeliverable ballots. They are not postmarked, because the USPS charges us directly for the postage (no need for a postmark). They are marked as return to send[er] and/or with a nixie label.”

Verdi said she saw two batches of undeliverable ballots at the ROV vote center on two different days, one in early September and one on Sept. 17. Each time, the ballots filled a space of about 1,300 cubic feet. She estimated the number of ballots to be about 30,000 each time.

On the second day, because she claims she was forced to stand about 50 feet away from the caged area, Verdi said “once I got my binoculars out,” elections officials “started taking racks and putting them in front of me so I couldn’t see.”

Kelley said the total of undeliverable ballots is “approximately 50,000” or 2.75 percent of the ballots mailed out to voters, and that he doesn’t expect any more for the recall election.

He pointed out that standard undeliverable mail rates from professional mailers are 3 to 10 percent, according to data available on the USPS website. “We are even below marketing mail,” he said.

The OC ROV’s undeliverable rate is below most of California’s 58 counties, he noted.

“The vast majority of our voters in the recall election used a mail ballot (943,590) and returned them without issue,” he said.

The most common reason for undeliverable ballots is that is “the occupant has moved without giving an up-to-date address, or if there is, we are not allowed to forward,” Kelley said.

Election databases are one of the few government databases where updating address information is not compulsory, he said.

Verdi, a former counter-intelligence and security special agent for the Dept. of Defense, said vote center staff often spoke openly when voters were not present that the long-term goal is to eventually eliminate all in-person voting.

Verdi said: “When it comes to elections, I think the voters need to realize that in the last 20 years, servicemen and women have given up life and limb to hold the line against terrorism—and if you want to go further back, since 1776—to ensure your liberty and freedom, so if they can hold the line, then you can stand in line and vote.

“You really don’t have an election day anymore. You’ve got two months.”

The Laguna Niguel resident went to cast her ballot in person on election day and, like many other voters across the state, was told she had already voted, although she hadn’t.

The “same thing happened” to her friends and relatives in five different counties, who voted Republican, Jordan said. She is convinced the problems were widespread and affected thousands of voters in more than just five counties.

Jordan said two supervisors at the polling location told her she could either vote by provisional ballot or register as a new voter.

Jordan said she ended up registering as a new voter to cast her ballot.

“It was all just extreme frustration.”

Republican candidate Larry Elder told The Epoch Times on Sept. 17 that the problem of voters being told that they had already voted occurred more often in traditionally red voter precincts.

“Every single area was a heavy Republican area,” he said.

Elder said the state’s old system of absentee ballots made sense, but now “anybody can print his or her own ballot,” he said. “What could possibly go wrong?”