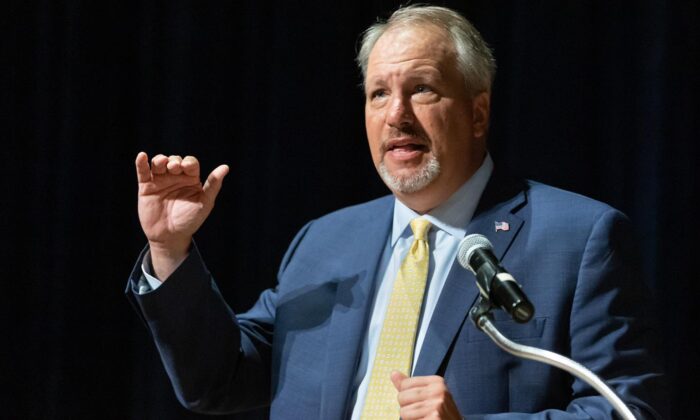 As the dual forces of the pandemic and fentanyl drive up overdose deaths, bail reform is inflaming the crisis even further, according to Orange County District Attorney David Hoovler.

Since the pandemic, Orange County drug overdose deaths have climbed from 79 in 2019 to 102 in 2020 and 123 in 2021, according to data published by the New York State Department of Health.

This year’s number is on par to match that of last year, according to Hoovler.

Fentanyl was the cause of nine out of 10 overdose deaths this year, whereas three years ago, it only accounted for half of the overdose deaths in the county, according to Hoovler.

“The message here is that the proliferation of fentanyl in our society is causing a drastic increase in drug overdoses, and because of the bail reform, not enough people are going to treatment, and the sellers are not being held accountable,” Hoovler said.

Before bail reform, between 90 to 130 people entered court-ordered drug addiction treatment programs every year, according to Hoovler.

Those who complete the programs will have their charges—mostly drug possession or minor drug trafficking charges—dismissed or reduced. The completion ratio is around 85 percent, he said.

However, bail reform rendered most drug crimes ineligible for bail. As a result, the number of people going through evaluations in jails and entering drug treatment programs dropped to half what it had been.

Today, about 50 people are in court-ordered treatment programs, Hoovler said.

Plus, most drug trafficking offenses are also ineligible for bail, which means most low-level drug dealers are released right back onto the street following arrests, he added.

“Bail reform is not the sole cause of the drastic increase in overdose deaths, but it must be considered in the equation. No questions about that,” Hoovler said.

The Epoch Times reached out to Gov. Kathy Hochul’s office for comments.

In April 2019, five months after Democrats regained control of both legislative chambers and governorship in New York, they crammed major criminal justice laws into the annual state budget.

The new laws eliminate cash bail for most misdemeanors and nonviolent felonies; they also mandate prosecutors to turn over evidence to the defense in a much faster timeline.

Since the laws went into effect in January 2020, crime has been on an upward spiral, especially in New York City. Under public pressure, the state legislature attempted to fix the laws twice by allowing judges to set bail on more crimes. However, neither fix touched drug crimes, Hoovler said.

The real fix, Hoovler said, would be to afford judges the discretion to set bails on drug crimes.