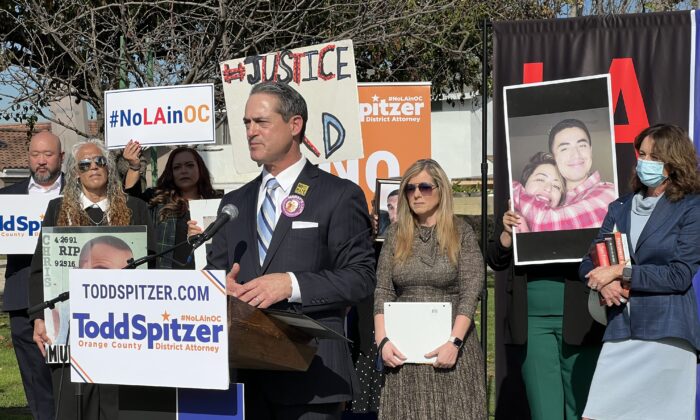 LA PALMA, Calif.—Orange County District Attorney Todd Spitzer kicked off his re-election campaign Jan. 26 in a conference where he slammed “woke DA’s,” his opponent, and Los Angeles-style policies he says have been contributing to a major uptick in crime.

The news conference was held at the border of Orange and Los Angeles counties in El Rancho Verde Park, a symbol of Spitzer’s testament to the political divide between the counties due to how they prosecute criminals.

Various speakers were featured at the event, all of whom were victims or families of victims of violent crime, mostly from Los Angeles County.

The overwhelming message of the speakers, including Spitzer himself, was this: Do not allow “woke” prosecutors to turn safe Orange County into dangerous Los Angeles. Even the DA’s campaign slogan “No LA in OC” was printed on large banners and pasted around the press conference.

One mother, Imelda Hernandez, who lost her son, Christian, in 2020 in Los Angeles County due to gang violence, said she felt so strongly about supporting Spitzer that she decided to attend his conference over going to a court hearing with her son’s suspected murderers.

“I decided I needed to be here not only to support District Attorney Todd Spitzer, but to also warn the residents of Orange County. Do not let what happened in Los Angeles happen to you or to us or to our communities,” Hernandez said at the conference.

“My son was a Latino murdered by Latinos. Murder has no color … and justice must be served for all people. With [Los Angeles District Attorney] George Gascón in office, he has made the journey for families of children a living hell.”

Gascón was routinely criticized during the event, as well as Spitzer’s opponent Peter Hardin, with Spitzer regularly comparing the two due to their policies.

Spitzer said his opponent’s initiatives are those of a “woke DA candidate” in order to attract money and special “interests across the nation.”

“It’s so simple. Do you want to remain the safest county in America? Or do you want to trade that off and take a risk with somebody who’s never been elected, has no track record, no voting record, got kicked out of the military, and had to resign from the district attorney’s office,” Spitzer said.

Hardin responded that crime has gotten worse under Spitzer’s watch.

“I protected this country as a Marine, and I protected Orange County as a local and federal prosecutor,” Hardin said in an emailed statement to The Epoch Times. “My opponent is a lifetime politician who will say anything to get reelected. Homicides and homelessness have soared since Todd Spitzer took office in Orange County.”

About 10 protestors came to the event, holding signs and shouting during Spitzer’s speech, claiming his administration has been embroiled in scandal and that Spitzer has not achieved justice for all crime victims as he promised.

Spitzer said he demanded the event would be in a public place so that both his supporters and opponents could be present.