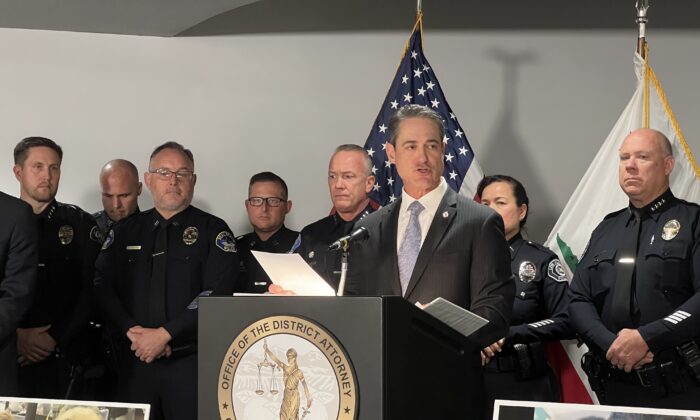 Orange County District Attorney Todd Spitzer announces that his office will now be charging convicted drug dealers with murder if they manufacture or sell drugs that result in someone dying, in Santa Ana, Calif., on Nov. 9, 2021. (Drew Van Voorhis/The Epoch Times)
Southern California

SANTA ANA, Calif.—Orange County District Attorney Todd Spitzer announced Nov. 9 that his office will now be charging convicted drug dealers with murder if they manufacture or sell drugs that result in someone dying.

The move comes as fatal fentanyl poisonings have skyrocketed across Orange County and the United States over the past few years.

Orange County saw a 1,000 percent increase over the last five years, and statewide deaths increased 1,513 percent, according to Spitzer.

Many drug dealers and manufacturers knowingly create and sell counterfeit pills, which are identical in color, size, and markings to genuine prescription pills such as Xanax, Oxycodone, Percocet—yet they’re laced with fentanyl, Spitzer said.

The fentanyl-laced pills are then bought under the assumption that they are genuine prescription drugs, and the small amount of fentanyl can end up killing the victim, Spitzer said.

“I’m not going to let drug dealers get away with murder,” he said. “It’s not going to happen anymore if we can help it.”

“These are not overdoses. These are murders,” Spitzer said. “These dealers are essentially handing a loaded gun to unsuspecting victims knowing that they will probably die, and they don’t care. Fentanyl is cheap, it’s easy to get, and it’s killing people who had no idea they were taking it.”

The Orange County District Attorney’s Office, similar to Riverside County, will now educate drug offenders of the potential for a murder charge if someone dies as a result of their drug. The DA’s Office will have the drug offender sign a document acknowledging the warning.

Additionally, police officers across Orange County will be formally warning drug dealers and manufacturers of the deadly consequences of fentanyl and other substances when they are arrested, which will be caught on body-worn cameras.

Then if a person commits another drug-related crime and someone dies as a result, the videotaped advisement will be offered into trial evidence, and the jury will see that the person was previously told they could be charged with murder.

“These drug dealers, these purveyors of death, are well aware of the poison they are handing out to your friends, your neighbors, your children, your children’s friends, your family,” said Matt Capelouto, whose 20-year-old daughter died from fentanyl poisoning.

“They make a conscious decision to sell a potentially life-ending, fake pill to a human being without regard for the repercussions. We have the opportunity to create real accountability for the actions of drug dealers that are literally murdering thousands of Americans.”

The California State Legislature failed to pass SB350 earlier this year, which would have made the controlled substance advisement a state law requirement.