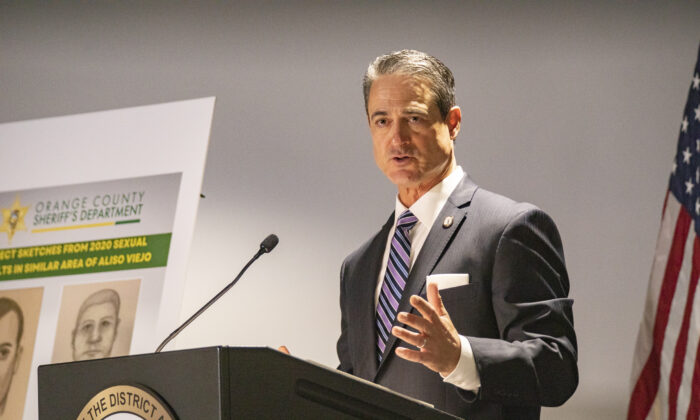 As I have previously reported in The Epoch Times, the elections for California attorney general and the county district attorneys are going to be really nasty this year. That always happens when crime goes up.

A race to look out for is Orange County’s district attorney. Four years ago, the election pitted longtime incumbent Tony Rackauckas against Todd Spitzer, who had been an assemblyman and OC supervisor. Spitzer contended Rackauckas had been around too long and botched several high-profile cases. Rackauckas said he had kept the county safe. Spitzer won.

This time Spitzer is running for re-election in a highly different environment, contending he has kept OC safe while crime has soared in Los Angeles and San Francisco under lenient DAs. His opponent is attorney Pete Hardin, a former U.S. Marine and federal prosecutor who says Spitzer has not cleaned up Rackauckas’ mess. Spitzer accuses Hardin of being one of the “soft-on-crime” types.

Another difference is, although this is a nonpartisan post, in 2018 both Rackauckas and Spitzer were Republicans. This time Hardin is a Democrat.

It’s unfortunate, but predictable, that race would become an issue. In this case, Spitzer is being accused of racism.

The Orange County Register reported, “The furor is partially centered around memos written by former Senior Assistant District Attorney Ebrahim Baytieh concerning an Oct. 1 meeting to discuss whether to seek the death penalty in the case of a Black man accused of killing a White couple in Newport Beach. According to Baytieh’s Dec. 3 memo, the group discussed defendant Jamon Buggs’ record of domestic violence. Spitzer inquired about the race of Buggs’ previous girlfriends.

“According to Baytieh’s memo, he and prosecutor Eric Scarbrough told Spitzer the question was irrelevant and inappropriate to consider in a discussion on the death penalty. The memo said Spitzer disagreed and ‘said he knows many black people who get themselves out of their bad circumstances and bad situations by only dating “white women.”’

“In a Dec. 21 correction later penned by Baytieh, he amended the line to say Spitzer ‘knows many black people who enhance their status by only dating “white women.”’”

Spitzer contends the matter was taken entirely out of context. It’s also disturbing Baytieh had to correct his notes on the conversation. How often do prosecutors’ notes get corrected? Does that affect cases’ outcome? Were there audio recordings?

Another factor is the death penalty is moot in California as a reality, although it remains an election issue and technically still is part of the California Constitution. Gov. Gavin Newsom has said he won’t allow any executions on his watch. No future governor is likely to change that. When this controversy came up, Spitzer dropped his call for the death penalty for Buggs, which angered the family of the victims.

The reporting on the memo led Riverside County DA Mike Hestrin and San Diego DA Summer Stephan to take back their endorsements of Spitzer. The three are tied together because they’re running for re-election on similar planks opposing the “soft-on-crime” policies of Los Angeles County DA George Gascón. Gascón is facing a recall funded, according to LA Magazine, by “some deep-pocketed Democratic donors and Hollywood grandees” upset with L.A.’s increase in crime.

The recall just prompted Gascón to reverse himself on his weak sentencing request in a sexual assault case in which the perpetrator, 17 at the time of the attack, should have been charged as an adult.

Spitzer’s own campaign focuses almost entirely on attacking his opponent for being a Gascón clone. One typical recent campaign missive began, “Orange County District Attorney Todd Spitzer slammed his woke opponent, Pete Hardin, for fundraising off of the same policies that just led to a light sentence for a convicted child molester in Los Angeles County.”

It’s part of an inevitable national backlash against recent left-wing policies that includes the election of Republican Glenn Youngkin as governor in Democrat-dominated Virginia and the Feb. 15 recall of three left-wing Board of Education member even in San Francisco, which has just 7 percent Republican registration.

For his part, Hardin wrote in a Feb. 19 op-ed in the Register of the Spitzer situation, “The revelations aren’t just appalling, they’re disqualifying, as our system of justice must be colorblind to ensure integrity in prosecutions and the trust of the communities we serve.”

It’s also disturbing Spitzer has been endorsed by the Association of Orange County Deputy Sheriffs, which relentlessly spewed lies about John Moorlach when he ran for supervisor a year ago, and for whose campaign I worked as an unpaid volunteer. Yet Spitzer also has been sensitive to reforms of police misconduct.

The bottom line is most voters don’t want to be conked on the head by a criminal. This is a repeat of the late 1960s and 1970s, when such tough-on-crime candidates as George Deukmejian and Ronald Reagan made their mark. The former became California’s attorney general, then governor. The latter became governor, then president.