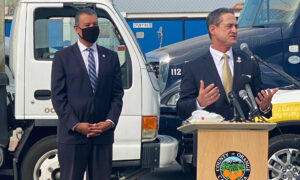 The Orange County District Attorney’s (OCDA) office has concluded its investigations of three police-involved shootings and says none of the officers involved were at fault.

On March 17, it released its report on the Dec. 12, 2019, fatal shooting of Taveonte Art Emmanuel, who was killed by police following a struggle over an officer’s gun.

It all began when a woman called Anaheim police to report that Emmanuel was trying to break into her apartment, where his wife was hiding.

His wife had previously lived in Emmanuel’s apartment at 150 North West Street with their 13-year-old daughter and stopped by that evening to drop off dinner for their child. When the woman arrived, Emmanuel forced her into the apartment and punched her several times in the head, the OCDA report said.

That was when she fled to a neighbor’s apartment for protection.

Police arrived about 10:38 p.m. and noticed Emmanuel standing outside of his apartment while they were interviewing the neighbor.

When police approached him, he didn’t cooperate and eventually descended nearby stairs into an underground parking structure. He kept his right hand in his pocket, leading police to suspect he was armed, the report said.

When police ordered him to sit with his hands behind his back, he allegedly refused. After multiple requests failed to yield cooperation, an officer began struggling with Emmanuel, who in turn tried to wrangle the gun from the officer’s holster, the report said.

“He struggled with Emmanuel for the gun and felt the gun release from the holster,” said the report.

The gun pointed in the direction of an officer, and the officers who were struggling with him were ordered to take cover so a third policeman could make a clear shot. After running behind a concrete pillar, police realized Emmanuel was holding an officer’s gun at his chest.

That’s when police fatally shot him.

A second case dates back to March 1, 2020, when Christopher Alvarez was fatally shot after wielding a gun at a Fullerton church. The OCDA released its report on that case on March 15.

According to the report, 26-year-old Alvarez was pointing the weapon at himself and others—including the police—and shot at the church piano.

A Santa Ana Police Department officer fired back and struck Alvarez, causing him to flee outside, the report stated. A second officer found Alvarez facedown and motionless on the street outside the church, where he was pronounced dead.

A third report, released by the OCDA on March 16, involved the fatal shooting of Sunshine Kamille Salac in Lake Forest.

The 28-year-old woman called the police to report a break-in on June 24, 2020, while pretending to live in her neighbor’s home. When police showed up, Salac was standing nearby under a tree, holding a handgun.

An Orange County Sheriff’s Department officer hid behind a nearby car and called for backup. He ordered Salac multiple times to put the gun down. She refused and was eventually shot by multiple officers when she was pointing the gun at them.

In all three cases, the OCDA concluded that the shootings were justifiable under the circumstances.

On March 11, Costa Mesa Police shot a knife-wielding man while he was stabbing a cashier during a robbery at an unidentified business on the 2200 block of Fairview Road.

Gabriel Tamayopaniagua, the knife-wielder, and his victim were both taken to the hospital after the incident, and both are expected to survive.

Police said an officer attempted to pull a vehicle over at Smithcliffs and North Coast Highway.

Instead of pulling over, the vehicle tried to lose the officer, striking two cars along North Coast Highway in Newport Beach. Shortly after, it turned around and headed back into Laguna Beach.

Once back in its city of origin, police were able to disable the vehicle. When the driver quickly hopped out, police shot him.

Tobiah Paul Steinmetz, 36, from Jupiter, Florida, was transported to the hospital for his injuries where he was labeled as being in critical but stable condition.

As is standard protocol with officer-involved shootings, the Orange County District Attorney’s Office is investigating both cases.