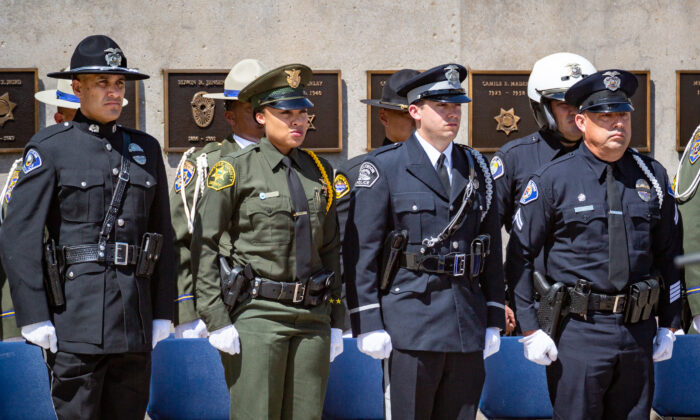 Orange County cities are proclaiming May 15 through May 21 as National Police Week, when officers will be honored nationwide for their sacrifice in keeping America’s communities safe.

The week, which is designated annually by the U.S. President and Congress, aligns with Peace Officers Memorial Day on May 15, when law enforcement officers who were killed or disabled in the line of duty are honored.

Irvine recognized its police department on May 10 during its city council meeting. The department’s honor guard was in attendance.

“The City of Irvine also recognizes those officers throughout the nation who have sacrificed their lives in service to their communities,” Irvine Mayor Farrah Khan said during the meeting. “On behalf of the city council and community, thank you to all our public safety officers for the vital service that you provide by protecting our residents, businesses, and visitors, and keeping Irvine the safest city in America.”

The Irvine proclamation asked citizens to appreciate the hazards and duties police officers have to perform every day.

Irvine Police Department Chief Michael Kent said he was thankful for the support.

“We know it’s been a rough couple of years for our city, county, state, and country, but your constant love and support of us have definitely been known, and we definitely appreciate that, so thank you very much for this,” Kent said.

The City of Cypress also recently honored its police and encouraged citizens to also celebrate the week with “ceremonies and observances.”

“These are the professionals that we call on and we not just expect, but we require them to be on their job 24 hours a day, seven days a week, and that they have to be ready for any and every single emergency situation,” Cypress Mayor Paulo Morales said during the city’s May 9 council meeting.

Morales said that he was a police officer before going into politics, and so he is well aware of the sacrifices that not only officers, but their families make as well.

Cypress Police Chief Mark Lauderback said he was thankful for the support, but noted officers join the ranks to help the people they serve.

“A lot of people join this profession not for the recognition. … They do it out of the goodness of their heart. They do it because they care about the community,” he said. “They care about people, and they just care about making this place a lot better of a place to live and to leave it better than they found it.”

It was created when President John F. Kennedy signed a 1962 proclamation designating May 15 as Peace Officers Memorial Day and the surrounding week as Police Week.