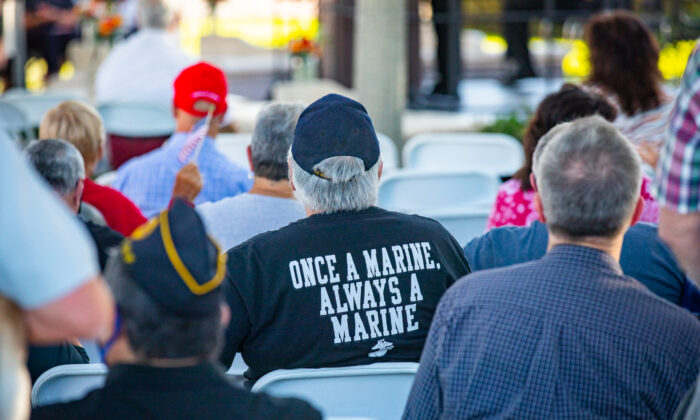 Throughout Orange County, different communities celebrated Veterans Day in their own ways to honor the county’s 100,000 veterans.

People enjoyed food and music along the Huntington Beach Pier.

Pat Tobin, a veteran at the car show who served from 1967–1969, told The Epoch Times that he showed up to support disabled veterans.

“In today’s climate, most people forget what the sacrifices were over these years, including World War I, World War II, [Korean War], and Vietnam [War], [which] was controversial. But still, a lot of lives were lost. It’s honoring the tradition, honoring the Constitution and the people who served with risk,” he said.

A father of four sons—all having served in different branches of the military—Bob Teeter showed up in his 1964 Malibu SuperSport. He said that many of his military friends did not make it back, so it was a very special day for him.

“Veterans Day means supporting your country and honoring the people who keep it safe,” Teeter told The Epoch Times. “It’s very emotional, and I lost a lot of friends.”

Herb Lieberman, who volunteered for the Army in 1956 and was discharged in 1964, said that he came out to pay his respects to the veterans with his 1952 Chevrolet pickup. He has been doing this for five years.

Harvey Liss, an Irvine local, said this event transcends politics and unites everybody with a shared appreciation.

“It doesn’t matter whether our wars were good or bad. They were directed by the government, and we should honor every veteran,” Liss told The Epoch Times. “The veterans did their duty to the country.

“It’s great to see people here who are on the opposite end of the political spectrum, and not to discuss any of that, just to be human to human and appreciate [the veterans]. That’s why I come here, and it’s always a wonderful event.”

A big crowd of veterans showed up at Depot Park, one of the oldest parks in Orange County, for its annual Veterans Day Tribute.

The event featured Maj. Daniel Connor of the Marine Corps—who flew Marine One and was a naval attaché to Pakistan—as the keynote speaker, as well as Orange Mayor Mark Murphy.

Murphy said though he has led the event as the city’s mayor for some years, this year’s outdoor celebration was extra special because last year’s was entirely virtual amidst the pandemic.

“As an elected official, I probably have said the flag salute more than most people, but it’s never lost on me the fact [that] all these folks were ready to make the ultimate sacrifice for us to have the freedom to do that,” he told The Epoch Times.

To Murphy, the armed forces are especially meaningful because his father, among other family members who served, was a Navy vet in World War II.

“Veterans Day is taking a moment to say thank you in recognizing all those that were willing to sign up and protect the freedoms we all enjoy each and every day. … All you have to do is [to] sit around some of the other places in the world and recognize how good we really have it here. We need to continue to protect it and also say thank you to those who took a hand in doing that.”