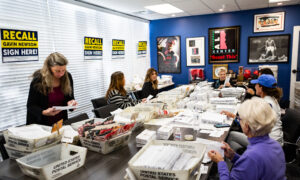 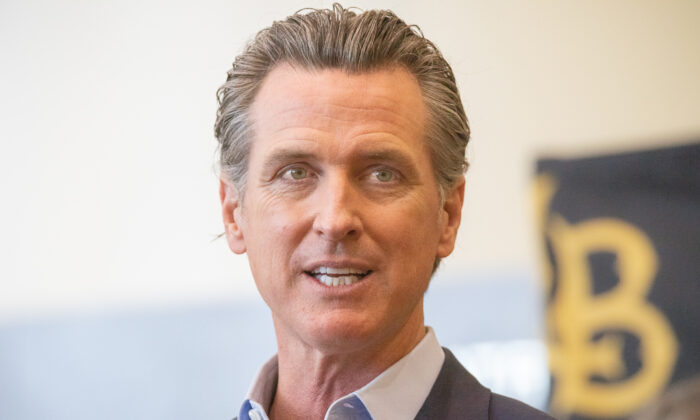 As California Gov. Gavin Newsom fights to keep his seat ahead of an impending gubernatorial recall vote, his efforts could be hindered by forces beyond his control.

The main menaces to Newsom’s continuation in the governor’s office—wildfires and blackouts—are by force of circumstance.

To combat wildfire concerns, Newsom in May garnered the endorsement of firefighters’ unions, the California Professional Firefighters, and the International Association of Firefighters.

In California, public employee unions are by far the most powerful political force.

The fact is that neither Newsom, nor his recent predecessors—Gray Davis, Arnold Schwarzenegger, or Jerry Brown—prepared the state for its current electricity needs.

It was Schwarzenegger, who ran in 2003 as a conservative but in 2005 flipped and became a liberal, who contributed most to the problem. The law he crafted and signed, the Global Warming Solutions Act of 2006, imposed draconian regulations that have since crippled electricity production, among other disasters.

The state effectively has two parallel power grids. One carries traditional energy from coal, gas, and nuclear power plants, several of which are in other states; the second carries electrons from the wind, solar, and geothermal “renewables.”

No wonder California electricity costs are double the national average.

I wrote almost all the editorials for the Orange County Register leading up to the Oct. 7, 2003, recall of then-governor Davis. It’s interesting to contrast that event, in which Schwarzenegger was elected as the replacement governor, to the current attempt to recall Newsom.

Newsom himself that year was a member of the San Francisco Board of Supervisors (which uniquely in the Golden State is for both the county and the city). Almost simultaneously with the recall, he was running for mayor of San Francisco on Nov. 4, 2003. As a Democrat, he won with 53 percent of the vote.

Newsom enjoyed a front-row seat to the election craziness of that year. The Bay Area was the only section of the state bucking the recall, with the rest of it—even Los Angeles County—in favor of dumping Davis.

In San Francisco, 80 percent of voters rejected the recall. Orange County, conversely, backed it by 73 percent.

Things are quite different today, with Orange County moving significantly in the direction of its more liberal northern neighbor.

In 2003, all Orange County’s members of Congress were Republicans, compared to just two today. A year ago, all seven were Democrats. Last November, two incumbent Democrats—representatives Harley Rouda and Gil Cisneros—were narrowly defeated. They were replaced, respectively, by new Republican congresswomen Young Kim and Michelle Steel.

It all impacts this year’s attempt to recall Newsom. If the recall folks can’t run up at least 70 percent support for the recall in Orange County, they don’t have a chance.

In 2003, the internet was just getting started among regular Americans. The iPhone was four years away. Social media didn’t exist. Television media was much more influential, while newspapers dominated news and opinion.

So far this year, I have seen no pro-recall ads, although they’re out there. On cable TV, I occasionally see the ads touting John Cox standing next to a bear, comparing himself as the “beast” to Newsom’s “beauty.” (He was sued by an animal rights group supposedly for abusing the bear, which probably helped his campaign by getting more publicity.)

For another candidate, the Los Angeles Daily News reported, “Caitlyn Jenner debuts slick TV ad in campaign to unseat Gov. Newsom. Drawing heavily from Jenner’s status as a 1976 Olympic gold medal winner, the ad shows her standing atop a mountain while touching on the state’s ordeal amid the pandemic.”

Former San Diego mayor Kevin Faulconer is running ads attacking “Newsom’s Failed Leadership.” The problem is that most of the issues cited are major concerns for Republicans, but not so much for Democrats or even independents.

One Faulconer ad attacks the school closures, but they’ll be open in August for the new school year. And he blasts the state’s business and tax climate, even as Newsom is promising to spread around a budget surplus of $76 billion, at least according to his creative accounting.

In his ads, former representative Doug Ose is stressing that because of Newsom, the state is “chaotic” and “screwed up.” He said, “I’m just not going to stand aside and let it get worse.”

The problem with all these ads is they put the cart before the horse. The horse is first recalling Newsom.

In 2003, Schwarzenegger depended on his star power to both give people a reason to dump Davis and to put the actor in the governor’s chair.

This time around, no potential candidate has anywhere near his charisma and name recognition. In 2003, Schwarzenegger was coming off the smashing success of “Terminator 3: Rise of the Machines.” Released on June 30 in Los Angeles, it went on to earn $433 million at the box office.

It was impossible for Davis to terminate the Terminator.

Today Newsom is pushing his own new ads.

The recall campaign is called Stop the Republican Recall. And the ads it’s putting up alternate between touting how great the economy is doing under the inspired leadership of one Gov. Gavin Newsom—and attacking Republicans for foisting the recall on the people of California.

It quotes Jeff Bezos’ Washington Post, which charged that “Republicans are undermining democracy.”

How can a recall, the very definition of direct, participatory democracy, be “undermining democracy”?

Didn’t Hiram Johnson and other progressive reformers in 1911 institute recalls precisely to restore democracy after it had been corrupted by the oligarchs of the day? Never mind.

The May 25 Public Policy Institute of California poll pegged recall support among registered voters at 40 percent, with 53 percent opposed and three percent unsure. Republicans back it with 78 percent, to 47 percent for independents, and just 11 percent for Democrats.

With the election expected to be called for November, it’s still more than four months before the voters get their say.

But unless the situation in the state dramatically turns for the worse, it’s going to be tough to dislodge Newsom.

Then next year, the process begins again with the state primary set for June 7 and the general for Nov. 8.

The Davis recall came less than a year after his reelection in 2002, meaning his replacement enjoyed more than three years in office. Newsom recall proponents might have been better to wait until 2023, by which time the state economy might also be going sour.

But it’s too late to make that course correction.