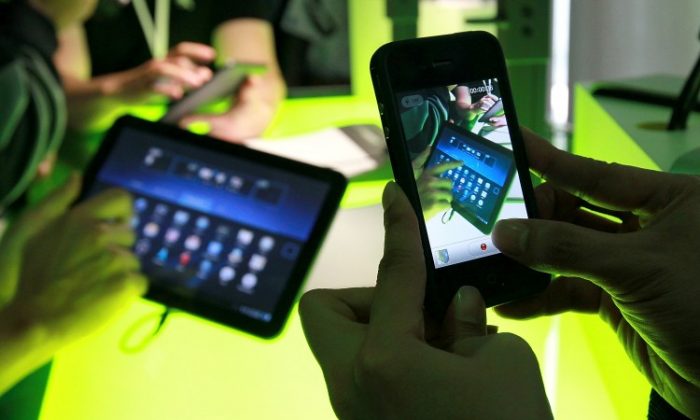 Android devices on display in 2011 in Mountain View, California. The copyright phase of the Oracle-Google Android trial has ended, but the results are not clear yet, with the patent phase of the trial having started. (Getty Images)
Tech

After dramatic turns in the courtroom, the jury in the Oracle-Google patent-infringement trial finally found on Monday that Google had infringed upon the “structure, sequence, and organization (SSO) of copyrighted works.”

According to the jury, the infringement specifically related to Java application programing interfaces (APIs) employed in building the Android mobile operating system. APIs are the codes that computer software components use to talk to each other.

Other than that, the jury was basically split on the remainder of the questions, making the outcome of the first phase of this giant litigation quite vague at the end of the copyright phase.

While the jury found that Google infringed on the SSO of the APIs, they were hung up on the issue of whether the API usage constituted fair use and did not answer this question. The fair use question was part of the first question posed by the presiding judge on API copyright.

On the fourth question, the jury found that “Sun and/or Oracle engaged in conduct Sun and/or Oracle knew or should have known would reasonably lead Google to believe that it would not need a license”—that basically Sun had led Google into believing that Google could use its Java APIs without needing a license. But the jury also stated that Google had not reasonably relied on such conduct in determining the copyright of the APIs.

Google’s lead counsel Robert Van Nest immediately stated that Google would file for a mistrial because the infringement and fair use parts of the first question were one question, and an unanswered part meant that the whole question was void.

Even though the answers were a yes or no, and were clearly stated, the actual result is a lot murkier.

While Google is filing for a mistrial based on the partial verdict in the first question, even the validity of copyright infringement is up in the air. The jury had been instructed by Judge Alsup to assume that the SSO of APIs was copyrightable, but the judge still holds the cards in the final decision on whether that is really the case.

Just this past week, a European court ruled in a major case there (involving software giant SAS) that APIs were not copyrightable. On cue, Judge Alsup asked both parties last week to file motions on the issue of API copyrights, and their views on the recent European verdict.

That means that despite the jury’s decision, Alsup could rule that APIs are not protectable by copyright, rendering the infringement question void. That is: assuming that a mistrial is not declared in the case first.

On the third question, the copying of a file known as Timsort.java, the programs for both Java and Android were written by the same programmer, Dr. Joshua Bloch, when he was at Sun and then Google, respectively. To complicate matters further, Dr. Bloch had written the file in question based on an open-source implementation from another language called Python. Google itself had admitted that these were the only nine lines of code that were in dispute and were close to identical, and is claiming that the closeness is a nonissue due to the origins of the file and other technical reasons. Further, Google had replaced the lines in question in the newest version of the Android operation system 4.0, also known as Ice Cream Sandwich.

In addition to the first infringement question—widely agreed as the most important question—the fourth question, whether Google knowingly infringed on the copyright or if it had been led to believe that it was okay to use, is only for the judge’s reference, but the judge will make a final decision on that. The jury found that Sun/Oracle had led Google to believe that it was fine to use the APIs without a license, but also that Google had not reasonably relied on that, which complicates the answer.

Google’s filing for a mistrial, if approved, would mean that the copyright findings could be thrown out and unused, or the judge could rule anyway, finding that APIs are either protected by copyright or not.

It is expected that a final decision on the copyright phase will happen this week or the next.

The decision comes after almost a week of drama, during which several juror notes were sent to the court, including one Monday morning where a juror said that she had talked to her husband about patents.

Moving to the Patent Phase

The patent phase of the trial started Monday morning after two days of filings from Google and Oracle. The judge ruled that Tim Lindholm, former Sun engineer and now Google engineer, and Android chief Andy Rubin could be brought back to testify, but subject to very restricted questions from Oracle.

Oracle’s lead counsel, Michael Jacobs, filed Oracle’s opening statements on Monday, explaining to the jury what a Java Virtual Machine is, along with the basics of the patents that Oracle is asserting.