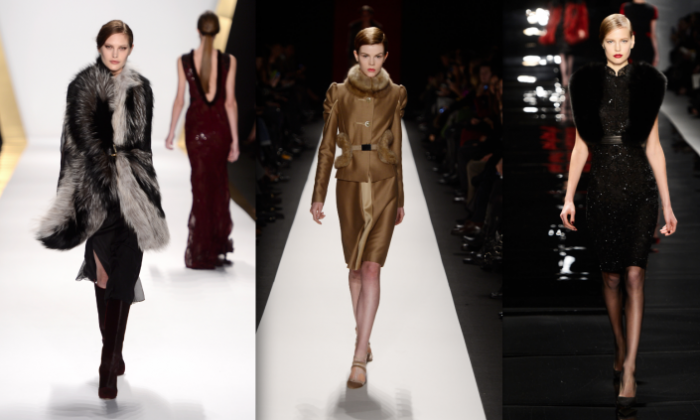 It’s a wrap! Another Fashion Week in New York is fully under our belts and we’ve had time to digest the new designs.

As expected, we spotted a number of front-row darlings, including Anna Wintour, Nina Garcia, Jessica Chastain, David Beckham, Hilary Swank, John Legend, and even Bono, who co-founded the EDUN label with his wife Ali Hewson.

However, the more interesting spotting was of designers attending the Oscar de la Renta show to support his “designer in residence,” John Galliano. Audience members included both Valentino and Diane von Furstenberg.

Some designers, like Peter Som and Rachel Roy, were concerned with the threat of a blizzard and decided to opt out of a live runway show; instead going fully digital.

But the show must go on, and you can’t hold the fashion-obsessed back from the tents at Lincoln Center.

Designers were clearly playing it safe with their collections this season, sending very commercial pieces down the runways. While we are certainly big on wearing black here in New York, we were disappointed in the dominance of the color in the fall collections. Nonetheless, there were some clear trends that emerged for Fall 2013.

Perhaps it’s our Indian heritage, but we love color and beautifully embroidered fabrics. Therefore, we were happy to see many designers pay homage to countries with a strong heritage of opulent dressing.

Both Zang Toi and Tadashi Shoji took recent trips to St. Petersburg. Both delivered very strong and dramatic collections that were influenced by what Zang Toi dubbed in the show’s notes as “Imperial Russia.”

BCBGMAXAZRIA delivered cozy wearable ensembles—influences from Turkey that included models wearing embroidered tunics over embroidered leggings, layered with sweaters under overcoats, and topped off with beanies. Cultural influences were cited throughout the runways at Tory Burch, Vera Wang, and Mara Hoffman.

While we love to travel, we were excited to go on this adventure while keeping our passports at bay.

Trend 2: Sophisticated in Houndstooth and Plaid

Bye-bye, bodycon! Designers made a strong statement by putting a stake in the ground and deliberately shifting away from both flowery patterns and tight body-conscious dressing—two trends that dominated the runways for the past few seasons.

There was a universal focus that was clearly more masculine and sometimes even androgynous in the collections. The catwalks were ablaze with plaid and houndstooth patterns, including Rag & Bone, Michael Kors, J.Crew, Oscar de la Renta, Suno, Marc Jacobs, Rebecca Minkoff, Billy Reid, Band of Outsiders, and the list continues.

While there is nothing earth-shattering about plaid, the delivery was updated and modern with clean silhouettes and mixed patterns.

Tommy Hilfiger creatively combined plaid with houndstooth and argyle—paying homage to U.K. Savile Row tailor Tommy Nutter, who catered to rock stars such as Mick Jagger and the Beatles.

Seeing lots of black on the runway isn’t newsworthy. However, the next big color trend for fall is actually a trend that continues from the spring collections: Green.

All shades of it were spotted on the runways, from muted military-green ensembles at Prabal Gurung to red-carpet-ready malachite-green chiffon gowns at Monique Lhuillier.

Some designers used the color to update classic silhouettes. Altuzarra, The Row, and Calvin Klein all showed traditional shift dresses or classic trench coats made fresh in moss-green leather.

So, while black is still the new black, it seems green is the new neutral.

It’s no surprise that coats were prominent on the Fall 2013 runway, but this year the outerwear was exceptionally exaggerated.

Designers juxtaposed the masculine and feminine in their coats and capes.

At first glance, the structured cape from Band of Outsiders seemed like a man’s overcoat, but it flowed elegantly as the model strutted down the catwalk.

Don’t tell PETA. Fur might be the hottest accessory for the Fall 2013 season. Whether real or faux, most designers in the circuit from A (Alexander Wang) to Z (Zero + Maria Cornejo) dabbled in fur in some shape or form.

We can’t talk about fur without first mentioning J. Mendel. Every year, J. Mendel showcases some glamorous fur coats, but this year he added fur to accessories—from handbags to cuffs.

Thanks to designers like Reem Acra, Altuzarra, BCBGMAXAZRIA, Vera Wang, and Jason Wu, we saw fur in the form of coats, capes, vests, collars, scarves, muffs, clutches, shoes, hats, belts … you name it.

It was dressed up on motorcycle jackets, suits, evening gowns, and bottoms of skirts at Bibhu Mohapatra and Donna Karan. It was dressed down in sporty, zipped-up hoodies and sweaters at Alexander Wang and Hervé Léger by Max Azria.

It came in many colors, ranging from bright pinks and yellows at Chado Ralph Rucci to bold reds and greens at Carolina Herrera and even in a patchwork of colors at 3.1 Phillip Lim.

Pialy and Sonaly Aditya are twins in the fashion-tech space with MBAs from Harvard and Wharton (respectively) and living in NYC.