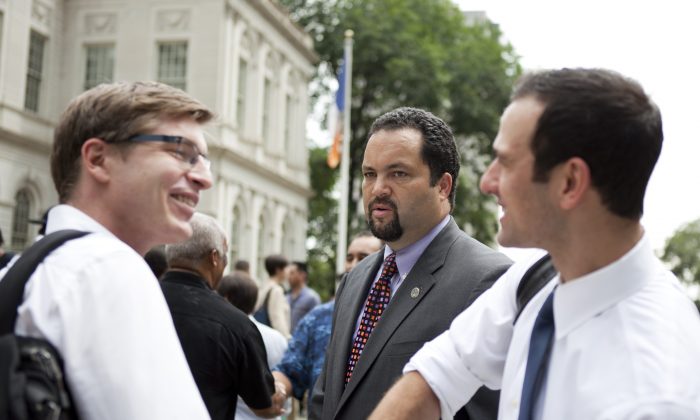 Ben Jealous, President and CEO of the NAACP, outside of City Hall on Aug. 22 before a full city council vote on the Community Safety Act. (Samira Bouaou/Epoch Times)
New York

NEW YORK—Against the backdrop of the fiftieth anniversary of Martin Luther King Jr.’s “I have a dream” speech on the ideals of racial justice, minority communities in New York City area readying themselves for a City Council mayoral veto override vote on the crime-fighting tactic used by police known as stop and frisk.

Gathered on the steps of City Hall on the afternoon of Aug. 22, scores of city council members and community advocacy groups held a one-hour press conference to rally support for the impending council vote. Council members are expected to pass a package of legislation that will install an NYPD inspector general and change the definition of racial profiling to “bias-based” profiling.

“We will have a city that keeps all citizens safe without profiling,” said Council Member Brad Landers during the press conference. Landers was a co-sponsor of the legislation, known collectively as the Community Safety Act (CSA).

Opponents of the CSA claim that stop and frisk helps reduce gun violence, but supporters have criticized the relevant data as not supporting those claims. Even the majority of those in favor of CSA have not called for the elimination of the tactic altogether, preferring reform and oversight of the NYPD.

“We’ve seen in this city policies and practices by the police department that have gotten out of hand,” said City Council Speaker Christine Quinn during a second press conference inside City Hall.

Quinn said she expects the vote count on the mayoral veto override to be “just about the same” as the original vote.

The NYPD and Mayor Michael Bloomberg have repeatedly said that stop and frisk is a necessary tool to keep the city safe, and point to the dramatic drop in violent crime over the past twelve years.

NYPD Commissioner Ray Kelly said in an Aug. 18 interview on NBC’s Meet the Press that though he understands the sensitivity of the issue for communities of color, there are reasons that stop and frisk occurs in those areas more often than others.

“Violence is happening disproportionately in minority communities,” said Kelly during the interview.

“This has been a big day, and this has been a battle in New York City almost since the city was formed,” said Ben Jealous, president and CEO of the NAACP after the rally, noting that after the vote the real work will begin. “These are old battles in the city.”

“When we win the vote today, Dr. King will be smiling down.”