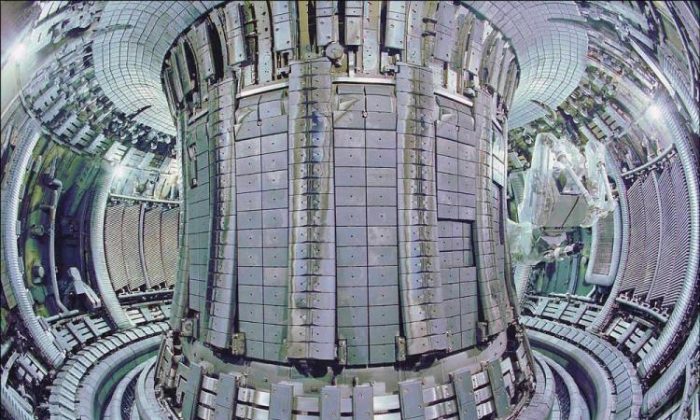 View of the toroidal chamber-magnetic (Tokamak) of the Joint European Torus (JET) at the Culham Science Centre. The JET is the largest fusion device in the world and European physicians managed to sustain 16 megawatts of energy for one second in 1997. (AFP/Getty Images)
Energy

Optimism in US Senate on Future Benefits of Fusion Energy

'Real shot' at having fusion power on grid by early 2030s: expert
By Nathan Worcester

Fusion energy experts spanning the government, academia, and the private sector testified on the prospects of fusion research before the Senate Energy and Natural Resources Committee on Sept. 15.

“We believe we have a real shot at commercial fusion power plants on the grid starting in the early 2030s,” said Bob Mumgaard, CEO of the private fusion firm Commonwealth Fusion Systems.

A 2022 Fusion Industry Association survey found that the sector has attracted more than $4.7 billion in private investment, marking a rise of more than $2.8 billion in just one year.

Today’s nuclear plants are based on nuclear fission—in other words, harnessing the energy created from splitting heavy atoms, such as uranium.

Fusion energy, by contrast, is produced when the nuclei of two light atoms come together to form a larger atom.

The fusion reaction that scientists consider most promising involves two isotopes of hydrogen, deuterium and tritium. Together, they can be fused into helium.

For that to happen, however, the two gases must be heated to more than 180 million degrees Fahrenheit. As temperatures rise, the gases turn into plasma: a loose jumble of positively charged nuclei and negatively charged electrons. This form of matter may sound exotic, but it makes up more than 99 percent of the visible universe.

Fusion researchers can keep that plasma in place with magnetic fields.

ITER, a massive international collaboration that includes the United States, is carrying out the largest such magnetic confinement experiment.

Fusion is mighty enough to power the stars; it’s how our own sun pumps out heat and light.

Shortages of tritium have raised concerns about the viability of deuterium–tritium fusion.

“In order to breed tritium, we need lithium,” said Scott Hsu, lead fusion coordinator for the Department of Energy, in his Sept. 15 testimony.

Even still, the advantages of fusion can leave its boosters breathless.

Committee Chair Sen. Joe Manchin (D-W.Va.) told his colleagues he thinks fusion energy may help bring about world peace, while ranking Republican member Sen. John Barrasso (R-Wyo.) said, “There’s an old saying about fusion. They say it’s 30 years away and always will be. But I believe that’s no longer the case.”

The committee’s optimism is rooted in recent scientific breakthroughs.

In Aug. 2021, Lawrence Livermore researchers achieved ignition. That means the energy coming from the fusion reaction exceeded the energy injected into it.

“Fusion energy is not yet at the stage to satisfy the need for abundant clean energy. However, we know that fusion has the potential to provide that energy for millennia,” said Tim Luce, head of science and operations for ITER.

Speakers emphasized the “bold decadal vision” for fusion energy, the basis of a March summit of the White House Office of Science and Technology Policy and the Department of Energy. Hsu was appointed to his current role at that meeting.

Hsu noted that large quantities of tritium should be subject to secure containment.

“The total level of radioactive waste from a typical fusion power station will be about 1,000 times lower than from a fission station,” said Steven Cowley, director of the Princeton Plasma Physics Laboratory.

‘Is This Really Going to Happen?’

Sen. John Hoeven (R-N.D.) had a simpler question, based on decades of promises made but not always kept by Big Science: “Is this really going to happen?”

Luce replied that much of the scientific knowledge is already there.

“Where we need the next frontier is technology. That’s where the mystery is and where the investment needs to be,” he added.

Pressed on the same question by Sen. Angus King (I-Maine), Mumgaard said the variety of technological approaches being explored as well as the multi-billion dollar scale of private sector investment suggest that real progress has been made.

“We haven’t yet seen the flight. But we’ve seen people gliding,” he said, likening the push for fusion to the race for heavier-than-air flight.

Sen. Bill Cassidy (R-La.) asked the experts how they might defend investments in ITER, given that it may be “progressing slowly and increasing in cost.”

“The US pays 9 percent of construction [and] 13 percent of operations. They get 100 percent of the outcome. So, if they were to do that themselves, they would have to pay 100 percent,” said ITER’s Luce, who added that the project is already underway.

Commonwealth Fusion’s Mumgaard had his own answer, one referencing the positive contributions of a somewhat troubled legacy company: “Just because we have Boeing doesn’t mean we stop building wind tunnels in the public program.”

More experimental work could lead to other innovations, he said, citing the potential for insights that could scale fusion reactors down in size.

“In the end, it’s going to be a question of, ‘Is the performance good enough to make the electricity cheap enough?’ And we don’t know the answer to that yet,” he added.

Barrasso asked Luce whether China and Russia should be permitted to continue participating in international fusion research, given their increasing bellicosity on the world stage.

“There is no weaponization potential for magnetic confinement fusion,” he added.

Cowley testified that China is presently the United States’ greatest competitor in fusion research, echoing Hsu’s remarks on the competitive nature of the field.

“China is putting a lot of money into the technology aspect,” he said.

Asked by Sen. John Hickenlooper (D-Colo.) about other countries’ advantages when it comes to fusion research, Luce spoke of France’s relatively innovation-focused approach to nuclear regulation.

ITER is headquartered in Saint-Paul-les-Durance, France.

Sen. Mark Kelly (D-Ariz.) asked Hsu whether advances in batteries, combined with more solar power, could be enough to eliminate the need for fusion.

“What I keep coming back to is we need more than 500, 600 exajoules of carbon-free energy per year by mid-century. Frankly, I don’t know how we’re going to supply that without more sources,” Hsu replied.