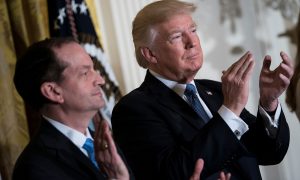 Trump: 'Communism Is the Past, Freedom Is the Future'
0
Share Now
FacebookTweetParlerEmail
Copy Link 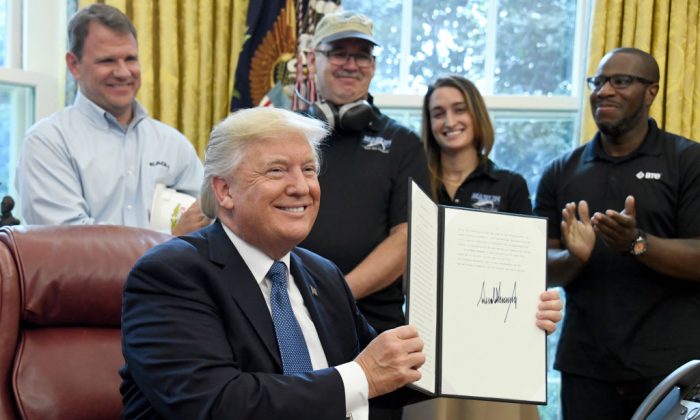 President Donald Trump displays a National Manufacturing Day Proclamation after signing it in the Oval Office of the White House in Washington, DC on Oct. 6, 2017. (Ron Sachs - Pool/Getty Images)
Companies

Optimism in US Manufacturing Remains Near Record High

Manufacturers have reported a significant improvement in their activity over the past 12 months, and they are more positive in their outlook compared to last year. Manufacturing leaders expect to see growth in sales, investment, and employment going forward.

According to the third-quarter survey conducted by the National Association of Manufacturers (NAM), nearly 90 percent of respondents said they are optimistic, just a shade fewer than the all-time high of 93.3 percent registered in the first quarter. Larger manufacturers are more upbeat than small- and medium-size firms, with 95 percent having a positive outlook for their companies.

President Donald Trump’s policies, including tax reform and deregulation, have raised business optimism since the election and encouraged companies, especially manufacturers, to invest in the country.

U.S. manufacturing added on average 14,000 jobs per month between November and August, according to the Bureau of Labor Statistics. In September, however, employment in the sector dropped marginally (by about 1,000 jobs) due to the effects of hurricanes Harvey and Irma.

Manufacturers predict that full-time jobs will grow by an average of 2.2 percent over the next 12 months, the fastest pace in the NAM survey’s history.

The survey also found that both sales and production of U.S. manufacturing firms are expected to increase by 4.5 percent, on average, over the next 12 months. And capital investments will surge by 2.7 percent, according to the estimates.

The most recent survey, which has been conducted quarterly for the past 20 years, included the responses of 524 manufacturers from all around the country.

“Our strength as a country depends upon the strength of our domestic industry,” said Trump at the ceremony held at the White House on Oct. 6.

“We want to dramatically reduce the tax on American manufacturers so that we can compete and win on the world stage,” he said.

Manufacturers believe the Trump administration’s tax reform, regulatory relief, and infrastructure investment are crucial for the future growth of the sector, according to NAM President Jay Timmons.

“This is the third quarter where we’ve seen record optimism by manufacturers,” Timmons said at the ceremony. “The three quarters’ average is the highest in the entire 20-year history of our survey.”

Under a comprehensive tax reform, nearly 65 percent of respondents would increase investments, 64 percent would expand their business, and 57 percent would hire more workers, according to the NAM survey.

While manufacturers are more positive in their outlook compared to last year, they are concerned about the political uncertainties. The survey respondents are worried about federal and state policy actions (or inactions) or geopolitical issues, including a potential conflict with North Korea.

The survey also found that the top three challenges for manufacturers today are rising health insurance costs, attracting and retaining a quality workforce, and an unfavorable business climate (including taxes and regulations).

Seventy-two percent of manufacturers anticipate insurance cost to increase by more than 8 percent over the next year.

Another big challenge that manufacturers face is attracting and retaining a quality workforce. Manufacturers have already started experiencing a serious shortage of qualified applicants for skilled production positions, according to the NAM.

Manufacturers in every state will hold events in the coming weeks to encourage more Americans to pursue a career in the manufacturing sector, said Trump.