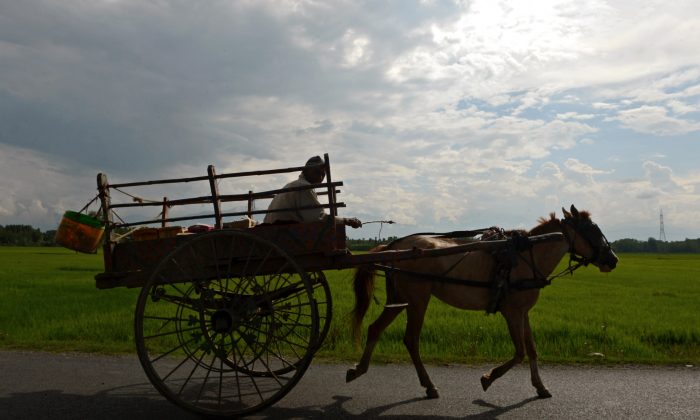 An Indian Kashmiri farmer rides a horse cart after a day's work on the outskirts of Srinagar on August 4, 2015. TAUSEEF MUSTAFA/AFP/Getty Images
Viewpoints

Optimism and Its Costs

Here is one version of a well-known ancient Chinese wisdom story:

There is a Taoist story of an old farmer who had worked his crops for many years. One day, his horse ran away. Upon hearing the news, his neighbors came to visit. “Such bad luck,” they said sympathetically.

The next morning, the horse returned, bringing with it three other wild horses. “How wonderful,” the neighbors exclaimed. “Maybe,” replied the old man.

The following day, his son tried to ride one of the untamed horses, was thrown, and broke his leg. The neighbors again came to offer their sympathy on his misfortune. “Maybe,” answered the farmer.

The day after, military officials came to the village to draft young men into the army. Seeing that the son’s leg was broken, they passed him by. The neighbors congratulated the farmer on how well things had turned out. “Maybe,” said the farmer.

On one reading, this story is a parable about blessings in disguise, misfortunes that, in the end, turn out for the best. It is a warrant for optimism, a mental attitude that expects the best outcomes, at least in the long run. Negative events have temporary causes, positive ones more permanent, long-term ones. Bad stuff happens, but in this view, the arc of history bends toward justice, or equality.

True or not, there’s much to be said psychologically for this optimistic vision. Research by Martin Seligman and other leaders of the “positive psychology” movement suggests there is a self-fulfilling quality both to optimism and pessimism.

A disposition to expect the best outcomes seems to make us happier. It predicts better relationships, higher social status, resilience in the face of adversity, and behavior that promotes health. Pessimism, on the other hand, may express itself in individuals as depression, anxiety, and feelings of helplessness. Culturally, as some see as evident today in the West, it may manifest itself as nihilism, cynicism, defeatism, and loathing of one’s own cultural heritage.

Furthermore, optimism can be learned, according to Seligman. For those with a low base level of optimism, being conditioned to be more optimistic makes people better able to handle adversity, and less likely to be depressed. They learn to dispute their negative beliefs and interpretations, and aim to habitually notice positive things in their lives and build feelings of gratitude. A simple method is to count one’s blessings, noting at the end of each day three specific positive things that happened and why. As little as one week of doing this can produce measurable improvement in someone’s happiness level. In learning new habits, we are building virtues and strengths necessary for human flourishing.

But optimism has its downside, as well. Most obviously, our tendency to look at what could go wrong was necessary—and not only for the survival of our distant ancestors surrounded by natural hazards, deadly predators, and hostile clans and tribes. It’s essential today to soldiers in the field, generals, planners, CEOs, policymakers, and even—despite the tendency to overprotect and coddle the young—to parents.

We learn from our mistakes and by removing those blinders that keep us, in our unconstrained optimism, “from seeing, seeking, using, or sharing highly relevant, easily accessible, and readily perceivable information during the decision-making process,” according to Harvard Business Review.

Optimism, as Sir Roger Scruton shows in his book on “The Uses of Pessimism: And the Dangers of False Hope,” can take the form in politics, architecture (as in the work of Le Corbusier), and other fields of a utopian, even totalitarian, disregard of the wisdom, experience, and desires of ordinary people over countless generations. Instead, a revolutionary elite, often under the leadership of an all-powerful dictator, substitutes its own reason, will, and power to remake society from scratch and impose its own ideas on the ignorant, “unwoke” masses.

When things go wrong, as they inevitably do, blame has to fall on scapegoats—kulaks, bankers, bourgeois counter-revolutionaries, toxic males, Christians, or traitors from within. It’s never the fault of those who sought to replace history, culture, and tradition with the wisdom of a small revolutionary vanguard. At most, it was the fault of those who distorted and corrupted the original vision.

The ancient story of the farmer and his horse, as we saw, seems to be a case for optimism in the face of adversity. Punctuate it differently, however, and it tells of how good fortune is followed by bad. Begin with a piece of good luck succeeded by a reversal of fortune, and we have a story of the fickleness of fate. It’s a reminder, in the old East European saying, that all things human, given enough time, go bad.

The story contains both elements. It’s not a case for optimism or pessimism, but shows us the need for the virtue of equanimity or composure in the face of good fortune or bad. It reminds us that, as parents, social workers, generals, or political leaders, we don’t have as much knowledge or control of events as we might think. We need humility to recognize the limits of our understanding and control of our own lives and, even more, the lives of others. Things may work out well “in the end,” but the end, in this life, never comes. As the ancient Greek statesman Solon put it, “Call no man happy until he is dead.”

Optimists, it’s said, proclaim that we live in the best of all possible worlds. And pessimists fear this is true. In place of either extreme view, we need a principled realism that grows out of and builds the virtues and strengths that keep us not only from despair and helplessness, but also from arrogance, pride, and overconfidence in our moral superiority, foresight, and wisdom.