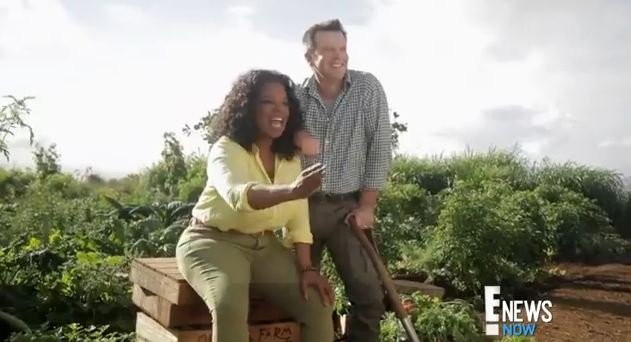 Oprah on her farm. (Screenshot/YouTube)
Entertainment

Oprah’s Maui farm: Oprah’s land in Hawaii includes a big farm, which will appear in the Oprah Magazine in June.

“We realized if we could grow delicious food ourselves, we could share it,” Winfrey wrote in the magazine. “So we designated 16 acres for farming, and last summer, with the help of a brilliant natural-resource-management group called Bio-Logical Capital, we planted a single acre with more than 100 species of fruits, vegetables and herbs.”

“It’s like having Earth jewelry; jewelry that comes from the Earth,” says Oprah, as she held up multi-colored Swiss Chard.

“We face a large problem of shipping 90 percent of our food,” he said. “What she’s really doing is providing an example. Of course on a large scale, but the idea is we can all do something to become self reliant on food in Hawaii.”

Oprah also announced a contest in which one reader of the magazine will win a trip to her farm.

The contest winner will get to hike on the farm with Oprah herself and wellness expert Bob Greene, as well as enjoy a meal cooked by Oprah’s personal chef made with fresh ingredients from the farm.