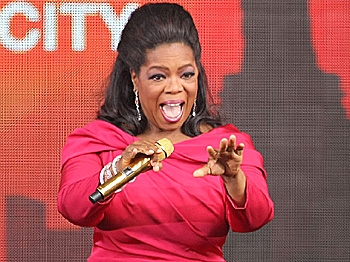 By Cheryl Casati
Print
The long time running and groundbreaking talk show The Oprah Winfrey Show, will end in 2011. The official announcement is to come from the queen of daytime herself during her show on Friday. In 2011, Oprah's contract with CBS Television Distribution will come to an end.

Oprah’s broadcasting career began at the young age of 17 on WVOL radio in Nashville. Her first television program AM Chicago first aired in 1984 and soon became WLS-TV's number one ranked talk show. Two years later, the show would be renamed The Oprah Winfrey Show, and quickly rose to the number one talk show in national syndication.

Today her show is viewed weekly by more than 20 million Americans, and is broadcast in more than 120 countries internationally.

People often refer to her as America's Beloved Best Friend. She was born in Kosciusko, Mississippi and raised by her grandmother. She moved to Milwaukee at the age of six to live with her mother. An experience of molestation at 13 years old caused her to run away.

Eventually, she ended up living with her strict father Vernon Winfrey in Nashville. He required her to read a book a week, write a weekly book report, and maintain a midnight curfew.

In her biography Oprah writes, "As strict as he was, he had some concerns about me making the best of my life, and would not accept anything less than what he thought was my best."

Oprah is often considered to be one of the world’s most powerful and influential people. She has played deeply moving roles in highly successful movies. She is probably best known for the role of Sofia in Steven Spielberg's 1985 screen adaptation of Alice Walker's novel “The Color Purple.” She received nominations for an Oscar and Golden Globe Award in the category of Best Supporting Actress. Winfrey put in another moving performance in Native Son, a movie adaptation of Richard Wright's classic 1940 novel.

Outside of film and television and her publishing empire, Oprah is also lauded for helping shape policy, encouraging literacy, and as a humanitarian.

In 1991, she initiated a campaign to establish a national database of convicted child abusers. Winfrey testified before a U.S. Senate Judiciary Committee on behalf of a National Child Protection Act. In 1993, President Clinton signed the "Oprah Bill," establishing the national database she had sought. This database is now available to law enforcement agencies and other concerned parties nationally.

She is also credited for fully funding and establishing the Oprah Winfrey Leadership Academy School for Girls in South Africa, intended to give talented underprivileged women an opportunity to receive a world-class education in preparation for college and fast-track careers.

Over the years, her guest list has read like a who's who from the world of entertainment, fashion, government, leading health experts, and famous athletes. The ending of the Oprah Winfrey Show is said by insiders to leave a significant gap in day time television, and both her fans and the business world will be watching her next career moves with great interest.