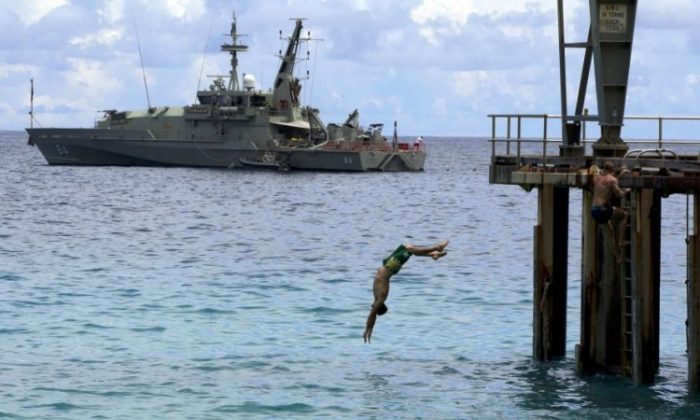 Off duty Australian Navy personnel enjoy some relaxation diving into the Indian ocean near by a Australian Navy boat used to intercept asylum seekers, docked at the Flying Fish Cove, Christmas Island, Australia.
US

Boats holding more than 1,500 asylum seekers have been intercepted on their way to Australia this year, following the navy’s capture of a third boat this week, and politicians continue to argue over how to solve the problem.

The HMAS Maryborough intercepted a boat carrying an estimated 71 asylum seekers on Thursday, near Scott Reef about 300 kilometres north of the Western Australia coast.

Opposition immigration spokesman Scott Morrison said in a statement that arrivals this year were already up 87 per cent on the same period last year, with more than 1,500 people arriving in just over three months.

He blamed the Federal Government for dismantling the Liberal Party’s Pacific Solution when it was elected in 2007, which was a policy of transporting asylum seekers to the Pacific island of Nauru for processing.

But Federal immigration minister Chris Bowen pointed to his Labor Government’s proposed arrangement with Malaysia last year, through which Australia would send 800 boat arrivals to Malaysia in exchange for 4,000 processed refugees.

The proposal failed to make it through parliament after Opposition leader Tony Abbott’s Liberal Party voted it down.

“The consequence of Tony Abbott’s relentless negativity is there for all to see–the government has always said that without a real deterrent the boats would continue to arrive,” Mr Bowen said, according to The Daily Telegraph.

“This latest boat is a sad reminder of Mr Abbott’s political calculation that more boat arrivals are in his best political interest despite the national interest, despite the risk to life.”