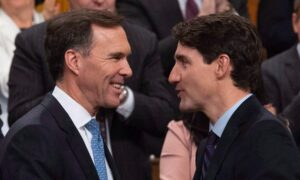 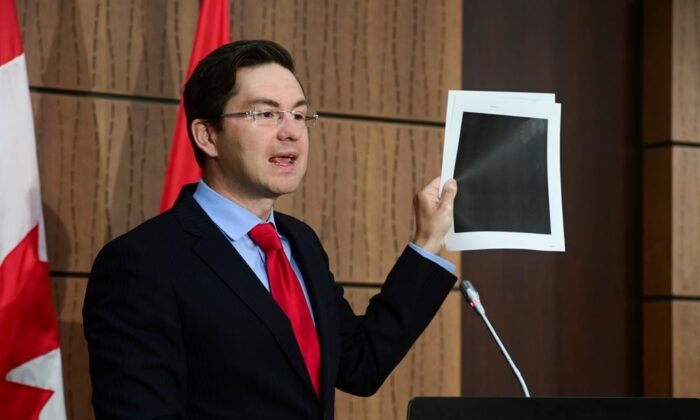 Conservative MP Pierre Poilievre holds up redacted documents during a press conference on Parliament Hill in Ottawa on Aug. 19, 2020. The documents were tabled by the Government at the House of Commons Finance Committee. (Sean Kilpatrick/The Canadian Press)
Canada

OTTAWA—Opposition parties are taking issue with the black ink applied to many of the thousands of pages of newly released documents about the WE Charity controversy.

Prime Minister Justin Trudeau ordered the documents released to MPs on the House of Commons finance committee Tuesday as he announced the prorogation of Parliament.

They contain numerous email exchanges between federal civil servants, political staff and WE Charity officials about the plan to have the organization run a multimillion-dollar student-volunteer program.

Yet many of the more than 5,000 pages have been either partly or fully redacted.

Canada’s top civil servant, Ian Shugart, says this was done in accordance with the finance committee’s own decision to protect cabinet secrets and personal information.

But Conservative finance critic Pierre Poilievre says the blacked-out portions raise many questions about the WE controversy—and that the committee cannot seek answers now that the prorogation has shut down their investigations.

NDP finance critic Peter Julian is writing a letter to the chair of the finance committee, Liberal MP Wayne Easter, arguing the censorship has gone too far.