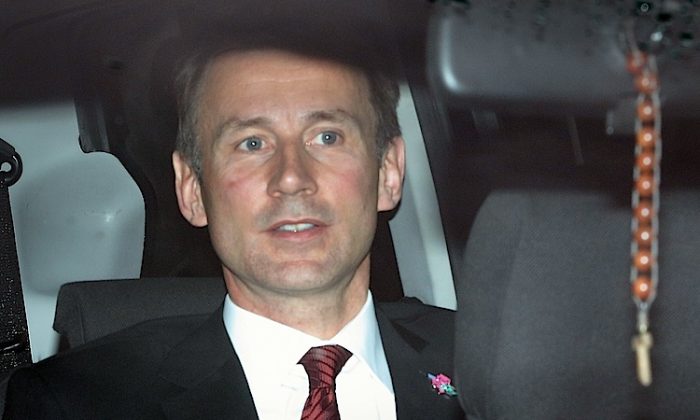 Opposition Bears Down on Cameron Over Murdoch Testimony at Leveson Inquiry

Jeremy Hunt is still the U.K. Culture Secretary after Prime Minister David Cameron strongly defended him during the PM’s Question Time on Wednesday.

Hunt had been spattered with calls to resign a day prior when James Murdoch in his evidence to the Leveson Inquiry into Press Ethics revealed a barrage of communication between Hunt’s department and Murdoch’s News Corps.

The Inquiry went through 163 pages of emails, phone calls, and texts that showed excessive openness from the Culture Department toward News Corp. The department was essentially in charge of adjudicating News Corps.’s bid to take control of TV company BSkyB in 2010 and 11.

Hunt’s adviser, Adam Smith, who had conducted most of the correspondence with News Corps., resigned on Wednesday saying, “I appreciate my activities at times went too far.”

Smith’s resignation is not enough, says Harriet Harman, the opposition Labour Party’s deputy leader. She argues that Hunt should also step down because the Ministerial Code of Practice states that ministers are responsible for their staff.

The Prime Minister’s relationship with James Murdoch and his father, Rupert, who owns News Corps, is also under scrutiny. Cameron has been furtive about details relating to his connection to Rebekah Brooks, former CEO of News International, the print section of the Murdoch’s News Corps. Rupert Murdoch has said he considers her a second daughter.

Brooks and her husband have been arrested concerning phone hacking in the News of the World.

Cameron was coy before admitting he had ridden on an ex-police horse owned by Brooks. He has also been very guarded about whether he spoke to James Murdoch about the BSkyB bid at a party given by Brooks during Christmas 2010.

This reticence and now his support of Hunt is associating the Prime Minister with “a shadow of sleaze,” Labour leader Ed Miliband shouted at Cameron in a noisy PM’s Question Time on Wednesday morning.

Chris Bryant, from the Labour Home Affairs group, told to the BBC that his party needs to keep up the pressure on Cameron, pointing out that while Rupert Murdoch has said he had meetings with Cameron on at least five occasions, Cameron admits to only one.

While Cameron was being grilled during Question Time, Rupert Murdoch was giving testimony to the Leveson Inquiry.

Lead counsel for the Leveson inquiry, Robert Jay, questioned Rupert Murdoch on the deals and influence which Murdoch may have been trying to garner from Cameron and past prime ministers. Jay marshalled his questions toward establishing that Murdoch had political intentions.

Regarding ex-Prime Minister Gordon Brown, Murdoch claimed that Brown had “declared war” on him after The Sun shifted its support from Brown’s Labour Party to backing the Conservatives in the 2010 election campaign.

Murdoch said Brown “wasn’t in a very balanced state of mind” when he rang up to complain to the media mogul.

When questioned about why he changed the editorial police at the paper, Murdoch said his decisions were not motivated by business.

“Mr. Jay, you keep inferring that endorsements were motivated by business motives, and if that had been the case, we would have endorsed the Tory Party in every election. It was always more pro business,” said Murdoch.

The Inquiry adjourned early to accommodate the stamina of Murdoch, 81, who faces another possible six hours of questioning on Thursday.