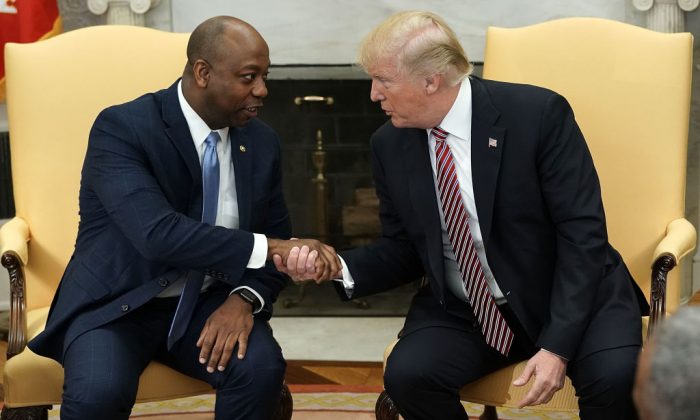 President Donald Trump shakes hands with Sen. Tim Scott (R-SC) during a working session regarding the Opportunity Zones at the White House in Washington on Feb. 14, 2018. (Alex Wong/Getty Images)
US News

WASHINGTON—The Treasury Department has rolled out guidelines for a program designed to bring jobs and investments to certain distressed areas, as part of an incentive in the Trump tax overhaul.

The Treasury Department on Oct. 19 issued rules for potential investors related to the “opportunity zones” tax incentive, which was created by the 2017 Tax Cuts and Jobs Act. Through tax breaks, the opportunity zones incentivize Americans to invest in economically underserved communities; the proposed rules provide guidance on how investors can qualify for special tax breaks in designated opportunity zones.

“We anticipate that $100 billion in private capital will be dedicated toward creating jobs and economic development in Opportunity Zones,” Treasury Secretary Steven Mnuchin said in a statement. “This incentive will foster economic revitalization and promote sustainable economic growth, which was a major goal of the Tax Cuts and Jobs Act.”

The program offers significant tax breaks to private investors. It allows investors to defer taxes on capital gains for 10 years, if the gains are reinvested in a qualified opportunity fund, an investment vehicle created to invest in opportunity zones. The benefits also include tax exemption on investment gains from opportunity funds, if the investment is held for more than 10 years.

The opportunity zones retain their designation for 10 years. However, investors can hold onto their investments in these opportunity funds through 2047 without losing tax benefits, according to the Treasury’s proposed regulations.

The project has the potential to become America’s largest economic-development program. U.S. investors are eager to deploy money into these zones, and several funds have already been set up to target this new asset class.

The activities and projects that can be financed include commercial and industrial real estate, housing, infrastructure, and startup businesses.

Investors (household and corporate) hold nearly $6.1 trillion in unrealized capital gains in stocks and funds, a significant untapped capital eligible for reinvestment in opportunity zones, according to the Economic Innovation Group (EIG) think-tank.

Local governments nominated their opportunity zones in April. And the Treasury Department certified 8,761 communities in all states and the District of Columbia and five U.S. territories. Nearly 35 million people are living in areas designated as opportunity zones.

Almost 50 million Americans live in an economically struggling community. While many cities and towns in the United States are flourishing, these communities are left behind in terms of investment and jobs growth.

A recent study by EIG revealed the stark contrast between distressed and prosperous areas in the United States in terms of human capital, job creation, and business formation. The study divides communities into five tiers and examines how the Great Recession of 2008 and the subsequent recovery affected these communities.

In the years following the recession, top-tier places have thrived. Meanwhile, most distressed zip codes have seen a decline in jobs, businesses, and population. And the gap in well-being between prosperous areas and the rest has become bigger.

The number of people living in prosperous zip codes grew more than 10 million since the recession; meanwhile, the number of Americans living in distressed areas fell by 3.4 million.

The picture is even more dramatic when it comes to business establishment and jobs.

And as for employment, all communities saw a similar decline in the number of jobs during the recession. However, the similarities ended during the recovery. By 2016, prosperous zip codes had 3.6 million more jobs than 2007 levels. Distressed ones, on the other hand, show no sign of recovery, according to the report.

Opportunity zones are expected to spur investment in these poor communities and help smooth the uneven recovery the country has seen since the recession.

Sen. Tim Scott (R-S.C.), who grew up in poverty in a single-parent household, sponsored the concept of opportunity zones. He introduced the bipartisan-backed Investing in Opportunity Act and made it part of Trump’s tax-reform package.

The Treasury Department will release additional guidance on opportunity zone tax incentives before the end of the year. And the draft regulations will be subject to 60 days of public comment.