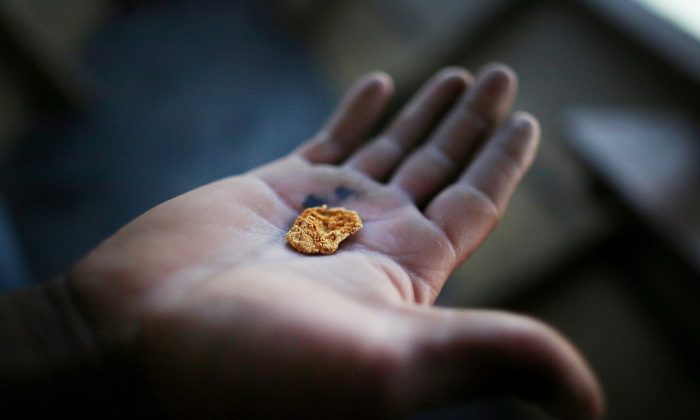 A gold miner displays a piece of gold after it was burned down to remove the mercury along the Madre de Dios River in the Amazon lowlands, near Puerto Maldonado, Peru, on Nov. 14, 2013. The biologically diverse Madre de Dios ('Mother of God') region has seen deforestation from gold mining in the area triple since 2008, when gold prices spiked during global economic turmoil. Small-scale miners are drawn to the area in hopes for higher pay but often face abysmal conditions. Gold is usually amalgamated with mercury during the process of informal mining in the region, which is discharged into the water supply and air, poisoning fish and sickening people in the area. Peru is the largest producer of gold in Latin America and the sixth-largest in the world. Informal mining accounts for roughly 20 percent of the gold production in Peru. (Mario Tama/Getty Images)
Americas

Opportunities, Not Oppression, to Stop Illegal Mining in the Peruvian Amazon

Targeting small illegal mines in Peru is counterproductive, and the entire supply chain should strive for ethical standards

MEXICO CITY—In the first week of 2016, Peruvian Prime Minister Pedro Cateriano announced the construction of a military base in the Amazonian state of Madre de Dios. It’s the latest phase in the escalating fight against illegal and informal gold mining, an industry tied to human rights abuses and widespread environmental destruction.

According to the prime minister, soldiers stationed at the base will conduct regular operations against highly active mining sites. The Peruvian government is drawing a hard line against a nefarious industry, and last year, authorities destroyed 86 illegal mining camps in Madre de Dios.

However, the militarized response to illegal gold mining fails to address underlying causes and may cause more problems than it solves.

Extractive industries, including gold mining, are the cornerstone of Peru’s economy. Peru is the largest gold producer in Latin America and sixth largest in the world. Large corporate mining companies, many of them transnational, produce most of the gold in Peru. Illegal and informal mining still comprise a substantial proportion of Peru’s gold production with an estimated 20 percent coming from illegal and informal mines.

Madre de Dios is a sparsely populated state, with about 140,000 residents occupying an area the size of South Carolina. Most residents live in Puerto Maldonado, the regional capital and its only city. Dense rainforests cover Madre de Dios, which lies in the Amazon basin in southeastern Peru, and rivers snake from the Andes in the west to Bolivia and Brazil in the east.

Deforestation for Chocolate Legal in Peru

For tens of thousands of years the rivers have carried gold flakes down from the mountains and deposited them throughout the region. The gold found in riverine sediments is too scattered to draw the interest of large corporations, but many small-scale operations have set up shop, taking advantage of the region’s remote forests to carry out their work largely without government oversight.

About 50 tons of mercury escape into the environment surrounding Madre de Dios each year.

Miners use the mercury amalgamation process to concentrate gold flakes found in sediments. Elemental mercury has the ability to bind to other metals, such as gold and silver, forming an alloy called an amalgam. After filtering gold-laden sediments into barrels, miners add liquid mercury and mix the resulting slurry to produce an amalgam. The amalgam is removed and heated over an open flame, evaporating the mercury and leaving the gold behind.

Most miners do not have equipment to capture the mercury vapors, and consequently many are exposed to dangerously high levels of mercury. The mercury vapors settle in the areas surrounding the mines and shops and enter streams. Once in water, bacteria biochemically convert the elemental mercury to methylmercury, an organic form that accumulates in living things.

How to Purify Mining Water in Hours, Not Years

Methylmercury enters the aquatic food chain, making its way in increasingly high concentrations into fish and larger, predatory fish. People who eat contaminated fish, including indigenous communities far upstream from the mines, are at risk of mercury intoxication. The Peruvian Ministry of the Environment estimates about 50 tons of mercury escape into the environment in Madre de Dios each year.

The United Nations estimates that 15 million people in 70 countries engage in small-scale mining.

Artisanal and small-scale gold mining is a global issue. The United Nations estimates that 15 million people in 70 countries engage in this form of mining, putting as many as 60 million people at risk of mercury exposure.

Social issues are tied to illegal and informal gold mining, in some cases including egregious violations of basic human rights. A report from Verité released in 2013 documents evidence of forced unpaid labor and sexual exploitation of minors in Madre de Dios gold mines. Additionally, illegal mining infringes on indigenous lands. In tandem with illegal logging and narcotrafficking, illegal mining increases the risk of harm to indigenous communities, especially those that prefer to live in isolation.

Illegal and informal gold mining as it exists in Madre de Dios today raises grave concerns, and there is clear need for government action to reduce the environmental and social harms.

However, the government response does not address the underlying issue of economic insecurity that drives workers into illegal and informal mining. Nor have authorities been able to root out the networks of organized crime that finance mines and reap most of the financial benefits. Rather, authorities have cracked down on workers themselves, casting them as criminals to be targeted by police and military operations.

Residents of La Pampa reacted with indignation. “We are not treated like humans,” Mariala Valdez, a La Pampa resident, told The Mirror. “We are being treated worse than animals…. We have nowhere to live and no way of supporting ourselves.”

A militarized response to illegal mining by itself is not the answer, and the wellbeing of the workers should be a concern. Criminalization fails to address workers’ economic needs. With few alternatives, mine workers displaced by police or military action end up returning to the mines.

Workers whose homes or equipment are destroyed by police are less likely to cooperate with government authorities. Many small-scale miners have sought to legitimize their business through a formalization process, which would afford some degree of government oversight. However, the political machine has stalled formalization for years. There are few options for the miners who want to continue their work with legal status.

A holistic approach to illegal and informal gold mining relies on more than just police action in the mining communities. Enforcement should focus on organized criminal networks, which enable illegal mining with material and financial support, falsify gold certificates, and move gold from mines to buyers in Peru and abroad.

Rather than punishing workers, authorities would have a greater impact by developing alternative livelihoods that draw workers away from the mines. The agroforestry and ecotourism industries in Madre de Dios are growing rapidly, providing new employment opportunities for former miners. Government support, including vocational training, can help workers transition from mining to these more sustainable industries.

To reduce the impacts of mercury pollution, government and NGO partners can focus on introducing mercury-capture technologies and, ultimately, mercury-free mining methods.

The Ashaninka of Peru: Rescued From Shining Path Militants, but Still at Risk

On a global scale, gold sellers and consumers can do more to ensure their gold meets basic ethical standards. One step is to build consumer awareness about the social and environmental costs of illegal and informal gold mining.

Another step is to introduce a gold certification process, which can help sellers and consumers avoid gold producers that exploit workers and cause environmental harm, including both corporate and small-scale producers. A holistic approach to more ethical gold spans the entire gold supply chain, from miner to consumer.

David J.X. Gonzalez is a Fox International Fellow with Yale University and El Colegio de México. Copyright © 2016 YaleGlobal and the MacMillan Center. This article was originally published on YaleGlobal Online.