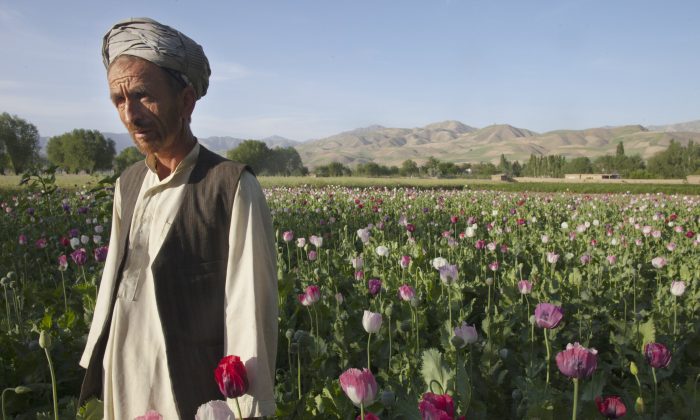 FILE—A farmer standing in his poppy field that ahead of harvest in Faizabad, Badakshan, Afghanistan, on May 25, 2011. (Paula Bronstein/Getty Images)
International

Licensed poppy farmers in the middle of the harvest in India are struggling with the menace of drug-addicted parrots ravaging their crops.

Farmers in the state of Madhya Pradesh, who are licensed by the Indian government to cultivate opium for medicinal purposes, complain about the scourge of parakeets addicted to the crystallized sap in the ripening poppies, the ANI news agency reports.

The wild parrots sometimes wait until farmers cut open the poppy pods to help them ripen before sucking out the sap, according to Earth.com, while the more desperate birds tear the pods off the stalks entirely, damaging the poppies and causing permanent loss to the farmers.

‘No Way to Protect Our Produce’

“We lose as much as 10 to 15 percent of our crop to these parrots,” Narendra Singh, an opium farmer from Pratapgarh, was cited by DNA discussing the same problem at last year’s harvest. “There is no way to protect our produce from them.”

“We have tried making loud sounds and even use firecrackers to scare the birds. But nothing has helped,” said Nandkishore, a poppy farmer from the Neemuch district of central India, NDTV reported. “We are already suffering because of uneven rain, and now this. Nobody is listening to our problems.”

Farmers said if the parrots destroy too much of the crop, they may also face penalties.

“We acquire a license to cultivate opium. The narcotics department, that buys our crops, has fixed parameters about crop quantity per land holding. If the yield is less, a penalty will be imposed,” Singh told DNA.

Video footage shows the parrots frantically tearing into the poppies.

“A large group of parrots feed on these plants around 30 to 40 times a day and some even fly away with poppy pods,” said Nandkishore, a poppy farmer from the Neemuch District of central India. “This affects the produce. These opium-addicted parrots are wreaking havoc.”

Farmers said they have to guard the poppy crops day and night to chase away the drug-addled birds.

Growing poppies for opium is big business in Madhya Pradesh, according to India Today, with 38,000 of the 44,000 hectares of India’s licensed poppy cultivation taking place between the state and neighboring Rajasthan.

Madya Pradesh is one of the few places in the world where poppies are cultivated under the supervision of the International Narcotics Control Board for legitimate medical purposes.

One reason the Indian narcotics authority—called the Central Bureau of Narcotics—imposes production quotas on licensed farmers is to prevent illicit trade in opium. There is a temptation for farmers to underreport production and sell off the excess to smugglers.

A case last year saw police receive a tip-off about two villagers illegally supplying opium to smugglers, and busted the duo with 53 pounds of the drug in their car.

But despite steps to curb illicit opium trade—including monetary bonuses to farmers who over-produce yet hand over their harvest to the authorities instead of to smugglers—pathology goes hand-in-glove with growing poppies for opium.

“Opium licenses are a symbol of prestige,” said Kamlesh Upadhyay, assistant professor of psychology at Government Girls’ College in Neemuch, according to India Today. “People with licenses are much sought-after for marital alliances. But the availability of drugs has also created a huge number of drug addicts here. There is not a single family without drug addicts in villages like Harvar.”