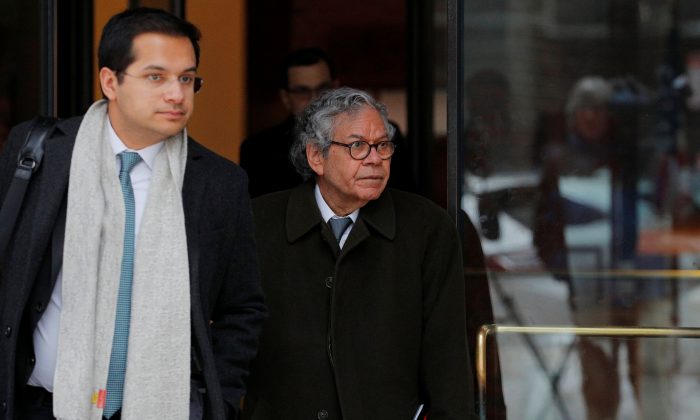 John Kapoor, the billionaire founder of Insys Therapeutics Inc., leaves the federal courthouse during the trial accusing Insys executives of a wide-ranging scheme to bribe doctors to prescribe an addictive opioid medication, in Boston, Mass., on March 13, 2019. (Brian Snyder/Reuters)
US News

The settlement stems from criminal and civil probes into Insys Therapeutics Inc.’s scheme to pay doctors in exchange for prescriptions of the drug meant for cancer patients with severe pain.

It comes a month after Insys Founder John Kapoor and four other former executives of the Chandler, Arizona-based company were convicted of bribing doctors across the country to prescribe the drug known as Susbys.

“For years, Insys engaged in prolonged, illegal conduct that prioritized its profits over the health of the thousands of patients who relied on it,” Massachusetts U.S. Attorney Andrew Lelling said in an emailed statement. “Today, the company is being held responsible for that and for its role in fueling the opioid epidemic,” he said.

Representatives for Insys Therapeutics did not immediately respond to a request for comment.

Authorities have held Insys up as an example of their efforts to target those responsible for driving the drug crisis.

Opioid overdoses claimed nearly 400,000 lives in the U.S. between 1999 and 2017, according to the Centers for Disease Control and Prevention. An estimated 2 million people are addicted to the drugs, which include both prescription painkillers such as OxyContin and illegal drugs such as heroin.

As part of the agreement, Insys will enter into a five-year deferred prosecution agreement with the U.S. Justice Department and its operating subsidiary will plead guilty to five counts of mail fraud, authorities said.

The company has agreed to pay a criminal fine of $2 million and forfeit $28 million. It will also pay $195 million to settle civil allegations, prosecutors said.

Prosecutors say top Insys executives put patients at risk in order to boost sales for Subsys by paying doctors bribes and kickbacks in the form of speaker fees for programs billed as educational opportunities for other doctors. In reality, prosecutors say, the events were mainly social gatherings for doctors and their friends to enjoy a fancy meal.

“Paying bribes and providing other incentives to prescribe opioids with little regard to patient welfare surely signals a company is more concerned with profits than patients,” Christian J. Schrank, Special Agent in Charge for the Office of Inspector General of the U.S. Department of Health and Human Services said in a statement.

Kapoor and four other former Insys executives were found guilty of racketeering conspiracy charges after a lengthy trial in Boston that exposed such marketing tactics as using a stripper-turned-sales-rep to give a doctor a lap dance.

The charge calls for up to 20 years in prison.

Kapoor, 76, and the others denied all wrongdoing.

An attorney for Kapoor said after the verdict that they would “continue the fight to clear Dr. Kapoor’s name.” His lawyers argued that the prosecutors were unfairly blaming the drug crisis on Insys as Subsys makes up a small fraction of the prescription opioid market.

The company said after the executives’ convictions that the “the actions of a select few former employees” are not indicative of the company’s work today.

For the last seven years, Dr. Mila Mogilevsky has dedicated her practice to treating acute chronic pain without opioid medications.

“In the long run, they [opioids] usually do not prove to work well when it comes to managing chronic, non-malignant pain,” she explained. “People develop opioid tolerance and dependence.”

Her approach is two-pronged: First, she uses non-surgical treatments that target painful areas, then she works with patients to make sure they have a comprehensive and customized rehabilitation plan.

These methods significantly resolve pain for months or years.

“The idea is that the nerves will not bother the patient for hopefully at least nine months to a year and a half. [But] they [the nerves] do grow back … which is why I tell my patients nothing we do is permanent and that’s probably a good thing, as opposed to, say, drastic surgery where changes are irreversible,” she said.

That is not to say that surgery does not have its place, she adds. “We work with a wonderful group of surgeons, who treat patients conservatively and provide excellent care when needed.”

Dr. Mogilevsky, who is board certified in pain medicine as well as physical medicine and rehabilitation, has firsthand knowledge of the rehabilitation process. Before becoming a physician, she worked for several years as a trained physical therapist.

“I know exactly who to send my patients to and how to follow up on their progress,” she said.

One patient, Celeste Willford, 42, suffered for three years with severe pain shooting down her arm caused by a herniated disc in her neck. Before meeting Dr. Mogilevsky, she had been taking opioid medications as prescribed, but the pain persisted.

“I had that electrical pain going down my arm all the time,” Willford said, “I couldn’t look up or turn my head to the right without pain.”

“I had been in pain for three years, so I started to cry,” Willford said, “This has changed my life.”

Willford said she has only had some minor pain now since receiving the injection, and she wants to undergo another procedure—ablation therapy—for maximum relief.

Dr. Mogilevsky and her team have a variety of non-surgical treatments to stop pain.

These treatments can address sports injuries, headaches, and chronic pain in the joints, back, and neck. Since there is no major cutting involved (only small incisions or injections), patients experience minimal downtime and do not need to stay overnight in the hospital.

Some of the treatments require only one to two injections to relieve the pain.

Dr. Mogilevsky said these are good alternatives to conventional surgery, which involves cutting the nerves to permanently disable them. With the temporary procedures, patients can get relief and, in best-case scenarios, fully heal with physical therapy or other rehabilitation.

For chronic back pain or neck pain, patients can get one or two injections of local anesthetic with or without steroid medication into the facet joints in the spine and neck. These injections numb pain and help diagnose if the facet joint is indeed the cause of discomfort.

If the patient shows an at least 60 percent improvement, the injection can be followed by ablation therapy, in which the nerves are subjected to radio frequencies that heat and destroy nerve tissue so the nerve cannot transmit pain signals.

For people who have pain in their back or limbs that does not respond well to other treatments, a spinal cord stimulator can help. Wire leads are inserted next to the spine and electrodes on them stimulate the spinal nerves with electrical pulses. A small, battery-operated pulse generator is implanted under the skin (often in the buttocks or abdomen) and connected to the leads. The patient can set the level of stimulation with an external programmer. The electrical impulses stop pain signals from reaching the brain and create a pleasant sensation.

For younger people with mild-to-moderate osteoarthritis or people who have injured muscles, tendons, or other soft tissues, platelet-rich plasma (PRP) treatments can help them heal. Treatments involve concentrating platelets from the patient’s own blood and injecting them into damaged tissue. The big benefit of PRP is that it helps restore full health to the injury.

For those with sciatica or acute low back or neck pain, or who wake up with pain shooting down their arm or leg, epidural steroid injections can help. These injections are given directly at the site of pain to immediately neutralize it. They can help relieve pain for months, allowing patients to make progress with a rehabilitation program.

Kyphoplasty is a minimally invasive surgical procedure for patients with severe back pain due to a compression fracture (collapsed vertebrae) in their spine, which is often caused by osteoporosis. The doctor inflates the collapsed vertebrae, then fills it with a cement compound to keep it stable.