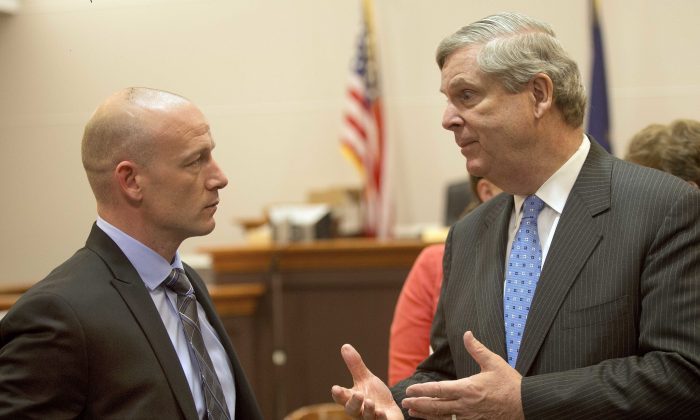 U.S. Secretary of Agriculture Tom Vilsack (R) talks with former heroin addict Chris Overka after a meeting at the Hillsborough County Superior Court in Nashua, N.H., on May 9, 2016. Vilsack, who has been candid about his mother's struggles with alcohol and pills, is leading an Obama administration initiative on rural opioid abuse. He visited Hillsborough County Superior Court in Nashua on Monday to hear about its drug court program, which held its first graduation ceremony last week. (AP Photo/Jim Cole)
US

A proposal to require at least two hours of age-appropriate drug and alcohol education yearly for students in kindergarten through fourth grade, and a minimum of four hours a year for older students, was among the package of bills lawmakers took up this session in response to a sharp increase in drug overdoses across the state. They’re now working out differences between the Senate version—which removed the minimum hours of instruction—and the House version, which encourages, but wouldn’t require, schools to provide such instruction.

Given that 94 percent of people who end up addicted to drugs or alcohol start using between the ages of 12 and 25, prevention efforts should go well beyond a “Drugs Are Bad” class in eighth grade, said Thomas McLellan, chairman of the Treatment Research Institute in Philadelphia and former deputy director of the White House Office of National Drug Control Policy.

“The way to do prevention is with prevention-prepared communities—communities that get together and give evidence-based prevention messages from the schools, from the police, from the church, everywhere,” he said at the Governor’s Summit on Substance Misuse last week.

Twenty-eight of the state’s middle and high schools currently have programs based on a model called Project SUCCESS, which stands for “Schools Using Coordinated Community Efforts to Strengthen Students.” In addition to a curriculum typically taught in seventh- or ninth-grade health classes, the program includes individual and group counseling for at-risk students and those who are using drugs or alcohol. Some are using to cover up or deal with anger and anxiety, said Erika Miller, a student assistance professional in Concord, so she tries to help them with problem-solving and conflict management.

“One of the first things I’ll do is ask them, what are your beliefs about this drug?” she said. “We’ll talk about that, and I can try to introduce them to other information about what really are the harms.”

Further north, the North Country Health Consortium coordinates a program called Youth Leadership Through Adventure. Students who have bonded and gained leadership skills through camping and other trips take the lead in planning awareness campaigns and activities aimed at changing the culture of their schools and encourage peers to seek alternatives to drugs.

Lynn Tilden, who graduated from Lin-Wood High School in Lincoln in 2011, participated in the program as a student and now oversees it at two schools. She said the state’s current drug crisis has made her view her job with a greater sense of importance.

“When I was in high school, it was more about marijuana and drinking,” she said. “Now, being on the other side, I see a lot more of the harder drugs I wouldn’t have imagined having in my hands at age 16.”

The program started with a few schools and expanded to the entire region in 2012. Since then, the percentage of students using alcohol, marijuana or prescription drugs has dropped in the participating schools, according to youth risk behavior surveys.

“I feel it’s more important than ever to let people know about this program,” Tilden said. “It really shows students there are more things out there.”