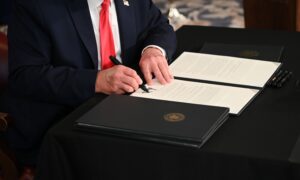 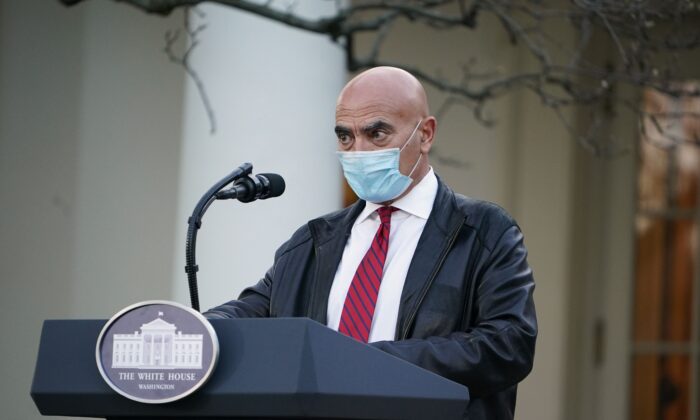 Dr. Moncef Slaoui, vaccine expert, delivers an update on Operation Warp Speed in the Rose Garden of the White House in Washington on Nov. 13, 2020. (Mandel Ngan/AFP via Getty Images)
AMERICA

A top official from the government’s vaccine development effort on Sunday predicted that by the end of January 2021, there will be a “significant decrease” in deaths among the elderly across the United States, as the nation prepares to roll out COVID-19 vaccinations by the end of the year.

Operation Warp Speed chief Moncef Slaoui told CNN’s “State of the Union” that he expects Food and Drug Administration (FDA) independent advisers to recommend emergency use authorization (EUA) for the COVID-19 vaccine candidate developed by Pfizer and BioNTech, when its vaccine advisory committee meets on Dec. 10.

Both Moderna and Pfizer recently announced that their trials for the CCP virus vaccine were successful and they have more than a 90 percent efficacy rate. Moderna’s vaccine candidate is also being reviewed by the FDA for EUA.

“We should be able to have immunized that full population, and the health care workers that take care of them, by the end of the month of December or by the middle of the month of January,” Slaoui said on Sunday morning, noting that 40 to 50 percent of COVID-19 related deaths in the country are coming from elderly Americans residing in long-term care facilities.

Slaoui said that America’s highly susceptible population—about 100 million people—should be vaccinated against the CCP (Chinese Communist Party) virus by mid-March, while the rest of the country “will not all have the vaccine in our arms before May or June.”

“I am hopeful that, by the end of the month of January, we should already see quite a significant decrease in the mortality and severe morbidity associated in the elderly population,” he said. “There are, of course, many other people, unfortunately, that have comorbidities that live outside of care facilities, that it will take more time to immunize them.”

He also said that be believes the the COVID-19 vaccine could have long-lasting effect once distributed.

Slaoui told the news network that only time will tell for certain, but in his opinion, the vaccine’s effectiveness could last for “many, many years,” with older people and others who are more vulnerable requiring a booster every three to five years.

He said that one of the hallmarks of immune systems is memory, so the body’s response to the CCP virus will be much faster once vaccinated.

Dr. Anthony Fauci, director of the National Institute of Allergy and Infectious Diseases, previously told CBS’ “Face the Nation” that he believes herd immunity could be achieved if enough people are vaccinated against COVID-19. He added, however, that he doesn’t think the scenario would be possible until May.

Herd immunity refers to when a population becomes immune to an infectious disease. Doctors say it will eventually be reached for all populations, and can be assisted by, but is not dependent upon, a vaccine.

Health and military officials said last week that the United States remains on track to distribute and administer enough COVID-19 vaccine doses for 20 million Americans by the end of the year.

While 40 million doses are projected to be available this month, each person requires two doses for protection, meaning about 20 million people will get vaccinated.

Army Gen. Gustave Perna, chief operations officer for Operation Warp Speed, told a press conference that officials are planning to be ready when the EUAs are approved.

“It’s just making sure that we have everything locked so when the EUA decision comes, distribution to the American people becomes immediate within 24 hours. That’s our goal. That’s what we’re striving for and that’s what we’re working to. You can’t execute if you don’t have a plan and that’s what our emphasis is as we work through all that process,” he said.

Doses will be distributed through airlines and shipping companies like FedEx and UPS.

“We visualize each week additional vaccines getting out and eventually we just continue to build on the amount of people that get vaccinated and hence on our way to ending this pandemic,” Perna said.