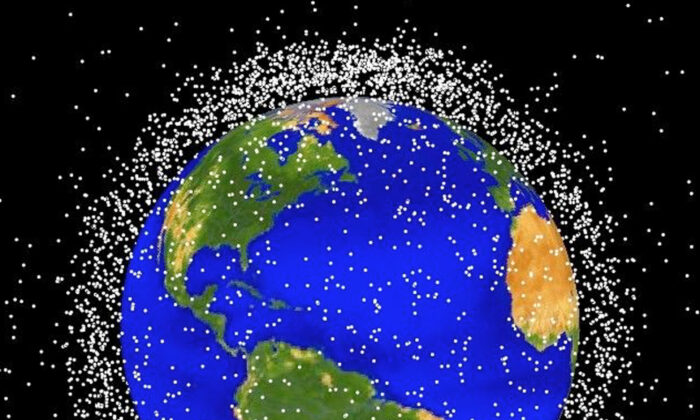 Australian researchers have set their sights on cleaning up the outer space junkyard orbiting Earth to avoid a chain reaction of self-sustaining debris collisions, using lasers and artificial intelligence technology.

Space debris expert Don Kessler, from the National Aeronautics and Space Administration (NASA) was the first to notice that space is at risk of becoming inaccessible to Earth. Kessler observed that once the amount of space debris in orbit reaches a critical point, unavoidable collisions will arise. These collisions will result in more debris, which will create a chain reaction of cascading collisions that can’t be prevented; this phenomenon is titled the Kessler Syndrome.

The US Department of Defense and NASA have estimated that there are around 23,000 pieces of space debris that are larger than a softball in Earth’s orbit currently. This junk is kept company by half a million pieces of debris the size of a marble or larger and around 100 million pieces that are one millimetre (about 0.04 inches) or larger in size.

Yet because the world is reliant on satellite technology for navigation, weather forecasts, and communication, governments and agencies are not able to stop sending satellites into orbit.

Many scientists are working on the identification and collection of space debris in Earth’s orbit, some are using nautical techniques such as nets and harpoons to fish out the bigger fragments of junk. However, much of the junk is difficult for astronomers to perceive because Earth has what scientists call a shimmering atmosphere that can hide particularly small pieces of debris.

“The ‘shimmer’ of the atmosphere is caused by the turbulence or fluctuations in the air above us,” Post Doctoral Research Fellow Sara Webb from the Swinburne University of Technology said in an email to The Epoch Times.

“Our atmosphere is thick and always moving due to the physics of heat and gases. It’s what causes the stars to twinkle, that light is being refracted and reflected in different directions constantly.”

To counteract the shimmering atmosphere, scientists use Electro Optic Systems (EOS) technology, which uses a laser attached to a telescope on Mount Stromlo in Canberra, Australia, to fire laser light into the sky. The shimmering action of the atmosphere distorts the laser light and allows the astronomers a chance to ‘see’ the smaller space junk.

“You can think of adaptive optics as trying to mimic the movements of the air above us to the mirror reflecting the light,” said Webb.

“We are trying to correct some of the refraction to sharpen and focus the light passing through the atmosphere.”

“By improving something we call ‘the seeing’ we can resolve smaller objects like space debris. These otherwise would be too faint and their light too scattered for us to identify,” she said.

The refined perception of these objects allows Australian astronomers to guide satellites, astronauts, and spaceships of both government and private agencies, away from the debris.

Another approach to removing smaller pieces of junk is firing a high-powered laser into the atmosphere. The pressure from the laser forces the space junk to lower its orbit toward Earth, where it then safely burns up as it enters the upper atmosphere.

“This is something called a ‘laser broom’, and it can ablate space debris. This means to help it lose/shred material, and by doing so, the force of the material moving away from the object imparts a small thrust,” Webb said.

“It helps the debris slow down enough to fall lower towards the earth and burn up on entry.”

Australia plays an integral part in the collection of space junk as they have space technologies that few countries in the Southern Hemisphere possess to monitor the immense sky.

However, given the exponentially growing amount of debris and satellites in space, relying on human guidance could lead to problems, given errors can occur. Scientists are thus positing that Artificial Intelligence (AI) guidance systems could be a better approach reported The Age.

A new range of smarter satellites that are guided by AI scientists argue could avoid space junk without human intervention whilst remaining complete and functional. However, the risk with AI is that the guided satellites cannot communicate with each other and, because of this, could trigger the cascading collisions that people are seeking to avoid.

In the partnership, there are space scientists, experts in law and policy, government, the space industry, and practitioners in AI assurance—a field focused on maximising the benefits of AI and minimising its dangers. The team will develop a framework to assess the trustworthiness of AI systems in space for companies, satellite operators, regulators, and insurers.