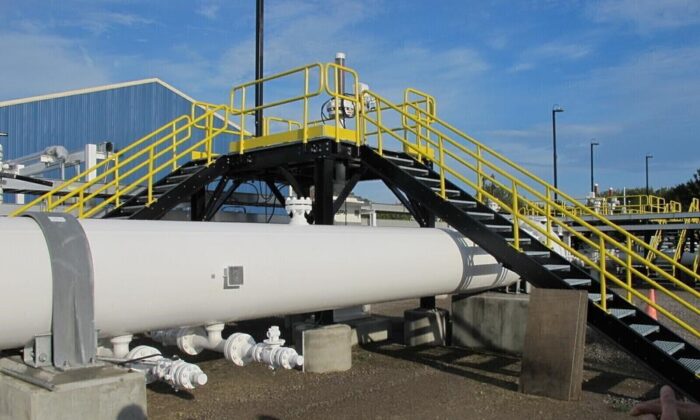 The continued operation of Line 5 is “non-negotiable,” says a spokesperson for Alberta’s energy minister.

The comments come after a Michigan judge ruled in favour of Enbridge Inc. on Aug. 18, in the company’s long-running dispute with the state over the Line 5 cross-border pipeline.

Judge Janet Neff said the case belongs in federal court, marking the second time in nine months that Neff sided with Enbridge on the question of jurisdiction.

“Alberta has always been clear: the continued operation of Line 5 is non-negotiable,” Puddifant said in a statement to The Epoch Times.

“Alberta will continue to support strong action to ensure Line 5 remains operational so that families and businesses in Michigan, neighbouring states, Ontario and Quebec are provided with reliable and safe energy. Alberta energy products support jobs on both sides of the border, lower U.S. energy costs, and play a vital role in maintaining a stable, affordable, North American energy system.”

The ruling comes as representatives on both sides of the border have been tightening relations in hopes of pursuing more energy projects.

West Virginia Senator Joe Manchin travelled to Alberta in April to discuss energy security in North America. The free world should be relying on Canada and the United States to provide the products and the resources it needs, he said.

He also used the trip to announce that he had invited Alberta Premier Jason Kenney to testify at the U.S. Senate committee on energy and natural resources in May.

Kenney travelled to Washington in June with Savage and other key ministers to pitch Alberta’s clean oil and gas as America’s solution to oil supply constraints and soaring gas prices. Kenney said the goal is ultimately to get another major pipeline project built.

The United States should make a strategic decision to work with Canada to build another major pipeline if it “wants to get off its addiction to OPEC [Organization of the Petroleum Exporting Countrie] conflict oil,” the premier said at a roundtable at the time.

Savage said a U.S. representative coming to Alberta and saying “we need you” is the most significant thing that’s happened for the province’s energy industry in 15 years.

Michigan Gov. Gretchen Whitmer has been seeking to shut down Line 5  since November 2020 over fears of a spill in the Straits of Mackinac, where the pipeline crosses the Great Lakes.

Michigan Attorney General Dana Nessel had hoped to head off Enbridge’s jurisdictional argument on the technicality that under federal law, cases can only be removed to federal jurisdiction within 30 days of a complaint being filed.

But Neff cited the precedent she established in 2021 when she ruled for Enbridge the first time.

“It would be an absurd result for the court to remand the present case and sanction a forum battle,” she wrote.

Proponents, including the Canadian federal government, say Line 5 is a vital and indispensable source of energy for Ontario, Quebec, and several U.S. Midwestern states.

Environmental activists fear an anchor strike or technical failure could trigger a catastrophe in one of the area’s most important watersheds.

Editor’s note: This article was updated on Aug. 20 with a quote from Alex Puddifant, spokesperson to Alberta Energy Minister Sonya Savage.