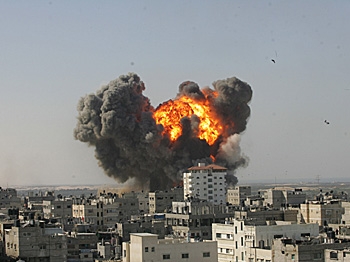 For the past two days the Israeli Defense Force (IDF) ground forces have been pushing deeper into the Gaza Strip, but have not yet entered Gaza City. For the first time since the start of the operation, reserve troops have gotten involved in the fighting.

Israeli Air Force (IAF) planes continue to attack targets throughout the Gaza Strip. Between 300 and 400 Hamas fighters have been reportedly killed, including Amir Mansi, the commander of the Hamas rocket attack program. Mansi was the Hamas official directly responsible for the launching of long-range Grad missiles deep into Israel.

Approximately 900 Palestinians have been killed so far, according to reports. According to IDF Military Intelligence Director General Amos Yedlin, Hamas troops in Gaza are keen on a ceasefire, yet reluctant to wave the white flag.

The Israeli War Cabinet announced on Jan. 11, that the operation in Gaza would need "more patience"—meaning it would need to be prolonged. Israeli Prime Minister Ehud Olmert stated that the fighting would end only after two conditions have been fulfilled—when the rocket attacks on Israel cease, and when arms-smuggling into Gaza stops.

The IAF halts its air attacks for several hours daily, in order to allow civilians in the Gaza Strip to get food and medical provisions. According to Israel, Hamas uses these "humanitarian recesses" to launch missiles into Israel's major southern cities.

Dozens of rockets and mortar shells continue to fall onto Israel. Most of them are targeted at large Israeli cities like Ashdod, Ashekon and Beer Sheba. Some rockets have hit cities only a half-hour drive from Tel Aviv.

One rocket made a direct hit on an apartment building. Another fell near a vacant kindergarten in Ashdod. Another rocket hit a house while the residents were in a shelter. Children have been kept home form school for the past two weeks.

Prime Minister Olmert stated on Sunday that, "No country in the world—not even those who preach morality to us—would have shown similar patience and self-control. At the end of the day, the sense of responsibility and the obligation to defend our citizens, after endless warnings, led us to the unavoidable decision to defend our children and our residents whose lives had become intolerable."