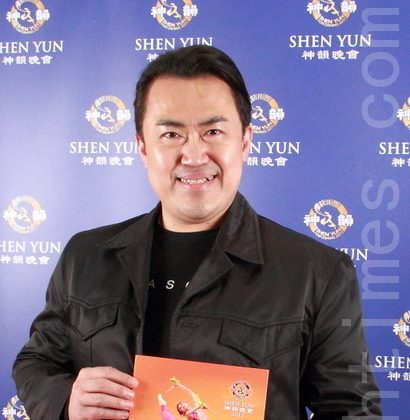 TAOYUAN, Taiwan—Wang Dian was a member of a professional choir in Frankfurt, Germany, for 11 years before he returned to Taiwan in 2011. On the evening on April 7, after he saw Shen Yun Performing Arts New York Company’s performance in Taoyuan, he was astonished. Mr. Wang said, “Every piece impressed me. I know that they must have worked painstakingly to achieve what they did. Please pass on my congratulations to the Shen Yun’s artists!”

Mr. Wang sang in Italian, German and French operas. “I have always been performing art of other cultures and not my own, which is something that moves me the most.” “Being a performer, if you can move yourself, you can definitely move the audience. Shen Yun artists perform their own culture and deem Chinese culture as an invaluable treasure, and that is why they can bring us such a spectacular performance,” he said.

As Mr. Wang had lived and performed abroad for a long period of time, he believed that the feeling for beauty and art is something that is beyond race and politics. He was deeply touched by the Shen Yun performance. “At the most touching moments, normally you just say ‘wow” to express the extreme emotions in your heart because there are no words capable of describing that kind of sensation and inspiration,” he said.

Mr. Wang was also impressed by the Shen Yun Orchestra, which combines classical Western and traditional Chinese instruments. “Not only do they not contradict each other, they create a win-win situation for each other and an unimaginable sound effect, magnificent truly!” he exclaimed.

According to Mr. Wang, normally when Eastern and Western music instruments perform together, there is some kind of contradiction such as their timbres. “Shen Yun’s orchestra handpicked the best parts of the two and magnified them! The aesthetic effect is multiplied and expanded. What a fantastic job!” Mr. Wang also commented on the music composition and the conducting which he said were “terrific!”

Mr. Wang highly admired the precision of the music with the artists on stage. “I can see the rigorous work behind the scene and the ample preparation work. The artists are magnificent. At every moment the music coordination is smooth and seamless.”

In China, traditional Chinese culture was all but destroyed during more than 60 years of Chinese Communist Party rule and Shen Yun is not able to tour to the mainland under the present regime. Mr. Wang said that it was a loss for the Chinese people not to be able to see Shen Yun perform in China. “This is our tradition and when the time comes, people in China will be able to see Shen Yun. After all, there is power in beautiful things.”