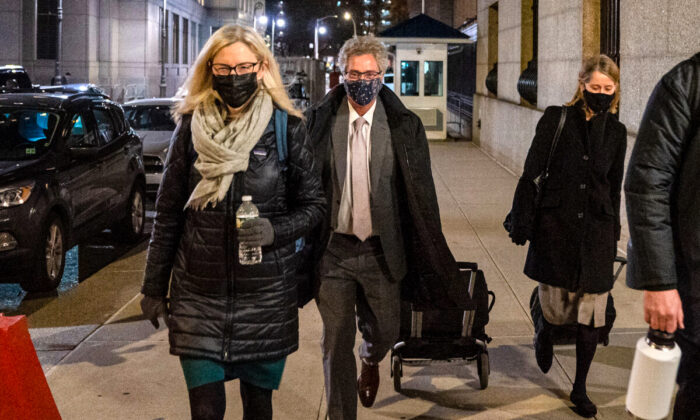 NEW YORK—Ghislaine Maxwell spent Monday listening to opening statements by the prosecution, as well as her defense team, in the first day of her trial in federal court in New York City.

Maxwell, an associate of the late, convicted pedophile Jeffery Epstein, was indicted by a grand jury on six counts of sex trafficking of a minor in June—essentially procuring and grooming underaged girls for sex acts with Epstein and his pals. Now, if convicted by the trial jury, Maxwell faces up to 50 years in prison.

Jury selection was not yet complete and there were two potential jurors with problems. One was only to be paid by her employer for two weeks for her civic service and the trail is expected to take twice that long. The other was surprised by his or her spouse with a vacation from Dec. 24 to 28, when the trial could still be ongoing.

It took several hours to solve those problems and the jury received instructions from Judge Alison J. Nathan after they were seated at 12:50 p.m.

U.S. Attorney Lara Pomerantz began the prosecution’s open at 2:10 p.m., with a story about Jane, who’ll eventually testify. Some witnesses in the trial will use only first names or pseudonyms.

Pomerantz told of how, at 14 years-old, Epstein and Maxwell approached Jane while at summer camp. Pomerantz claims the pair went on to gain Jane’s trust with faux interest in her life, shopping trips, and money for her cash-strapped family.

Pomerantz spoke of three other victims who will testify.

Attorney Bobbi Sternheim had a different picture to paint for the defense. She explained how the memories of these witnesses have been compromised over time—some of these accusations go back to the 1990s—as well as from what they’ve heard in the media.

Sternheim blamed all the crimes on Epstein and described him as “the proverbial elephant in the room.” She compared Epstein and Maxwell to Adam and Eve.

Several statements by Sternheim were met with objections from the prosecutors. Some of them were discussed in side-bars.

The first witness was Lawrence P. Visoski, Jr., who was the pilot for Epstein’s private jets from 1991-2019.

Pomerantz asked him several basic questions regarding dates and his duties. She asked him to point out Maxwell, which he did. She asked several questions about the layouts of the various residences that Epstein owned.