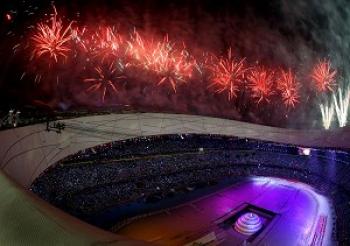 The long-awaited opening ceremony for the Beijing Olympics was meant to be an extravaganza that would herald to the world China’s rise as a great nation on the world stage.

Directed by the movie director Zhang Yimou, the ceremony was certainly long, involved, and giant in scope, featuring a cast of 15,000 performers. While some early reports admired the ceremony, it has also found critics inside and outside China.

According to Cao, Zhang Yimou imitated in many ways the style of the opening ceremony of the 1936 Berlin Olympic Games directed by the infamous director Leni Riefenstahl. At the Beijing opening ceremony, a human sea of formations marched in uniform, recalling the masses gathered in Riefentsahl’s propaganda films.

One post said, “Let’s pretend we were watching a propaganda film! Old Zhang tried to make a modern film, but apparently he is at his wit’s end!”

Cao said, “Individualism and freedom will be wiped out again and replaced by nationalism.”

There were three parts to the opening ceremony. It started with the welcoming ceremony where the Olympic flag and PRC flag were raised. The second part featured art performances titled “Beautiful Olympics.” The arts performances were divided into two parts, including glamorous civilizations and magnificent ages. Finally, athletes from the world marched into the stadium in the order of their country’s names translated into Simplified Chinese.

One internet post read, “It lacked passion and strength. It brought shame to the Chinese people!”

While another chimed in, “I only watched a few minutes before I gave up. It was boring. I hate it!”

The Chicago Tribune, in its report on the opening ceremony noted “For all its in-your-face grandiosity, there was a muted, monotonal quality about much of the cultural exposition that reached a dramatic climax with 2,008 white-clad martial arts performers.

[caption id=”attachment_71745″ align=”alignleft” width=”320″ caption=”With a vertical red line painted on their foreheads, the drummers looked as though