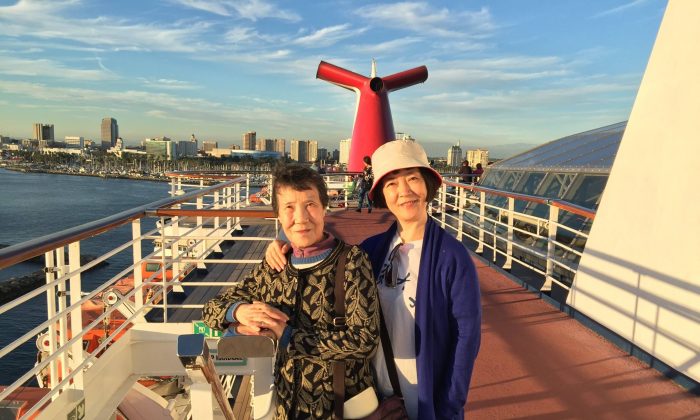 Jennifer Zeng and her mother on the deck of a cruise ship at Long Beach, California in October 2015. (Courtesy Jennifer Zeng)
Thinking About China

My name is Jennifer Zeng. I am a journalist, a writer, and a Falun Gong practitioner living in Washington.

I watched your landmark speech on U.S.–China relations on Oct. 4 and was very much impressed when you said, “More journalists are reporting the truth without fear or favor, and digging deep to find where China is interfering in our society, and why.”

If you could, please allow me to say that I am proudly one of the journalists you talked about. Ever since 2001, when I escaped China after nearly being tortured to death in the Beijing Female Forced Labor Camp for practicing Falun Gong, I have kept on writing books, personal stories, opinion pieces, and news reports to expose crimes against humanity by the Chinese Communist Party (CCP), as well as its infiltration of the United States and other Western countries.

However, I am not writing this letter to boast about what I have been doing. I am writing to draw your attention to the price I have been paying for writing about and exposing the facts, and to seek help from you.

Several days ago, on Oct. 1, my 76-year-old mother traveled from Mianyang City in Sichuan Province, China, to the city of Chengdu, and then from Chengdu to Shanghai—a journey of over 1,000 miles—to catch a plane from there to the United States to visit me—a journey of 7,300 miles.

Coming to the United States is a very tiring and long trip that my mother has been reluctant to take, as she has just had surgery, and her health isn’t good. She doesn’t speak any English and traveling alone to America would be very challenging.

However, she bravely took up the challenge, as, in both a bitter and sweet way, she regarded this as the last chance she would have to see me in her life. She said she didn’t intend to come again after this visit, as she would be too old and unfit to travel, and she never dared to expect that I could travel back to China to visit her.

Why can’t I go back to China? Because as a Falun Gong practitioner, and an outspoken writer and journalist, I could never, ever—since I escaped China in 2001—get a visa to return.

For more than 17 years, I haven’t been able to visit my family in China, not even when my father was dying in the hospital, before he eventually passed away in 2014, without having seen me for more than 13 years.

So for my mother, the only way for her to see me is to fly across the ocean to the United States.

She was filled with mixed emotions of excitement, longing, sweetness, and bitterness, and an expectation of seeing me in just 15 hours. But alas! To her astonishment, she was unexpectedly stopped at customs at Shanghai Pudong International Airport, where she was told that her passport had been revoked by the Public Security Bureau in Mianyang City; an officer actually destroyed the document by cutting off two corners of the main page.

No explanations were offered. My mother, a shocked, scared, desperate, helpless, and weeping elderly lady, had to figure out, in the middle of night, in a strange place, how to notify me that she couldn’t come, how to stop her luggage from being flown to the United States, how to get a ticket to fly back to Chengdu, and how to travel back to Mianyang from Chengdu with her big luggage, by herself.

Several days have passed since then, and my mother is still weeping alone at home, too distressed and ashamed to go out and let others know that she was not allowed to travel.

My heart was nearly broken to learn all this. Why did my mother, an innocent and harmless elderly lady, have to suffer this kind of inhumane treatment?

Ever since the persecution of Falun Gong started in 1999, more than 19 years ago, she has had to repeatedly suffer bitter, unnecessary, and groundless separations that felt like death, when both my sister and I were thrown into labor camps, when I had to flee China to avoid further persecution, and when my father died in misery after suffering from persecution for more than a decade.

And now, her last hope of seeing her dear daughter for the last time in her life was so cruelly taken away.

I’m crying my eyes out as I write this letter to you. Please help my mother get a new passport so that she can come to visit me. Please help end this 19-year-long ruthless persecution of Falun Gong in China, the largest scale human-rights disaster in this century.

I was very glad that you mentioned religious freedom in China in your speech, but was disappointed that you didn’t mention Falun Gong.

The sheer number of imprisoned Falun Gong practitioners, and the scale and extent of the persecution, isn’t the worst part of the story. The most inhuman, evil fact of the persecution is that the CCP wants to deprive people’s God-given human dignity and rights to own their own thoughts, free will, and beliefs.

In order to force Falun Gong practitioners to give up and even attack their faith in truthfulness, compassion, and tolerance—the main principles that adherents follow in their everyday lives—the CCP stops at no evil to destroy people mentally and spiritually.

Apart from targeting the very essence that defines a human being as a human being, the CCP goes so far as to treat human beings as “commercialized” body parts and organ banks, in order to make huge amounts of money.

From 2000 to 2015, the CCP regime is estimated to have performed 60,000 to 100,000 transplants each year, with the bulk of the extracted organs coming from Falun Gong practitioners, according to a 700-page report, released in 2016, which exposed in detail China’s lucrative practice of organ harvesting from prisoners of conscience.

Nobody knows exactly how many lives have been taken to keep up with the demand for organ transplants in all these years.

But one thing is sure: After accumulating “experiences” during its 19-year-long persecution of Falun Gong practitioners, the CCP is “expanding” what it’s learned to the wider society. That is why we are seeing re-education camps being set up in Xinjiang, and an Orwellian-type monitor and control system being established in the entire Chinese society, as you mentioned in your speech.

I am very glad to see that under the leadership of President Donald Trump and yourself, the United States is ready to stand up to defend U.S. interests and values against the CCP regime. And I hope that the 100 million Falun Gong practitioners and their families in China can also gain moral support and help from the United States.

Lastly, if you could, please investigate Wang Minghua, who is the vice mayor of Mianyang City, the CCP’s party secretary, and director of the Public Security Bureau in Mianyang City, to see if he belongs on the U.S. sanctions list of CCP officials who violate human rights. I believe he is the one responsible for illegally depriving my mother of the lawful right to hold a passport and is culpable for many crimes against Falun Gong practitioners.

I can see that the shockwaves caused by the decision among Chinese communities have been huge. I believe that holding individuals accountable for what they have done is a very effective way to stop the evil deeds in China, and to send a message to those who might want to make a different choice, because actions have consequences.