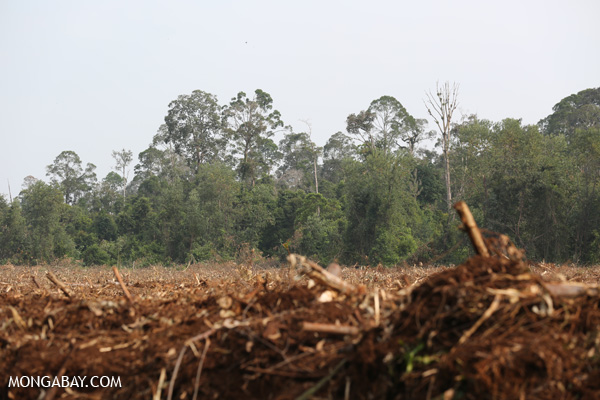 Letter to Indonesia President on Environment

Congratulations on your successful bid for the Indonesian presidency. Although neither you nor your opponent spent much time focusing on the environment, the world hopes your previous record in Surakarta (Solo) and Jakarta, coupled with the idealistic language in your campaign platform, is evidence enough of your intent to slow the rapid destruction of Indonesia’s environment. It will be a long and challenging road, but the Indonesian people have entrusted their country to you based on the promises you made to them. The world looks forward to watching you enact policies that keep these promises.

As a reminder, your 42 page platform begins by enumerating the major issues holding Indonesia back. Among them, “environmental damage as a result of excessive exploitation of natural resources,” is singled out as a key cause of economic weakness of the country. You re-iterated this idea during the final presidential debate, saying, “We have to find a balance between economic interests, public interests and protecting the environment. Our forests are being destroyed, our beaches are being destroyed because we have pursued economic growth too aggressively and not paid attention to the environment.”

To help tackle the issues of deforestation and overfishing, you state in the fourth of your nine agenda priorities, that you intend to eradicate corruption, and strengthen law enforcement. You specifically included the commitment to, “eradicate illegal logging, illegal fishing and illegal mining,” and, “enforce environmental laws.” Strong language, and a difficult challenge given Indonesia’s deeply fractured and conflicting systems of decentralized law enforcement.

During the third debate, you specifically aligned illegal fishing in Indonesian waters as a issue of national defense. When asked what you would do to increase defense without alarming other countries, you advocated using advance technology to patrol Indonesia’s fisheries. Noting that illegal fishing had caused Rp 300 trillion (US$25 billion) in state losses, you said, “To protect the country’s natural resources, drones should be set up to monitor illegal fishing activities, as well as illegal logging.” This is obviously an urgent and expensive problem, so lets see those drones flying sooner than later.

However, beyond these general commitments to making things better, you have said little about how you will accomplish these goals, or measure their success. The closest you come to moving beyond rhetoric and setting targets—beyond ambitious reforestation numbers, and modest increase in marine protection—is your goal of reaching an average of 70 to 80% on the Environmental Performance Index. As you know, this international index aggregates 20 indicators from national data on environmental health and ecosystem vitality. Indonesia currently scores 44.36%, ranking 112 out of 178 countries, so 80% is an ambitious target… but, a measurable one. I will be watching these numbers eagerly.

In addition, your platform commits to adding 700 hectares to the system of protected marine areas, and to rehabilitate 100.7 million hectares of degraded forest land. Some have questioned whether there are currently even 100 million hectares of degraded forest land to rehabilitate, but regardless of that fact, it shows you are committed to the issue. I will be excited if you keep to your more modest goal, stated in the debates, to restore 2 million hectares annually. I am also looking forward to the immediate completion of national spatial planning, as you advocated, and the adoption of “one map” to sort out conflicting forest, mining and plantation concessions.

Now, some environmental groups are understandably nervous about your plans to aggressively develop the energy sector. However, while explaining your plan for energy independence during the debates, I noticed you did indicate your support of increasing public transportation options to reduce traffic issues and energy consumption. You also said you support incentives to encourage development of a bio-fuel industry. I would feel more optimistic if there were numbers attached, and stronger commitment to other renewable energies, but I understand you have a country to develop, and can only trust that your concern for global warming, and stated support of the Kyoto protocol will guide this development.

Your platform addresses climate change twice: first in the section on Political Sovereignty, in paragraph 1(b) you write that you are committed to, “Intensifying international cooperation in addressing global problems that threaten humanity such as infectious diseases, climate change, the spread of small arms trafficking, human trafficking, water scarcity, energy security, and the spread of narcotics.” Further in paragraph 3 in the section on Economic Self Reliance, you write, “we are committed to climate change issues not only for environmental concerns, but also for the national economy.” What look forward to hearing the policy changes you will put into effect as part of this stated commitment.

I note below additional statements in your platform about the forestry sector, creating sustainable industries, and increased law enforcement. Rather then detail each one, I will simply list them, and remind you that your citizens, and the world eagerly look forward to checking these items off the list as you accomplish these goals.

It is worth singling out, however, two final goals you set in your platform for both their creatively progressive stance, as well as their measurable outcomes. First, your plan for starting a Go Organic! program in Indonesia with 1,000 villages becoming organic food producers by 2019 is exciting, and I look forward to learning the specific steps you will enact for making this happen. Second, your goal of 80% of Indonesian households being aware of green living principles and applying them to their everyday life may be somewhat more difficult to quantify, but it shows a commitment to shifting a cultural attitude—a difficult but vital shift in Indonesia’s development.

In short, though much of your environmental platform may consist of vague and unmeasurable expressions of needed action, I am confident you are a man of your word, and will work to ensure these ideals are translated into sound policy. The Indonesian people made their choice, and the world joins in them in encouraging rapid and effective improvements in your country’s environmental policy. We can not afford to wait any longer.

Section 10 on development of Maritime economy

5) Rehabilitate environmental damage to the coast and oceans

Section 11 on strengthening the forestry sector

4) Evaluate and planning for the utilization of sustainable forest resources

6) Preservation of natural resources and ecosystems

13) Develop a utilization plan for the 1.99 million ha of forest area that has not been recorded

3) Develop and implement a national system of sustainable production

4) Educate consumers to understand and practice an environmentally friendly lifestyle

6) Encourage sustainable agriculture development through implementation of organic farming and bio-eco-region appropriate practices that conserve land and water. Launch Go Organic! Indonesia with a pilot program to reform the agrarian practices of 1,000 villages to become organic food producers by 2019, with an additional 1,000 villages by 2024. And, conduct enforcement towards sustainable agricultural practices by accelerating the implementation of Law No.41 of 2009 on the Protection of Agricultural Land and Sustainable Food and derivative regulations

7) “Role model” the attitudes and behaviors of those who care about the environment, and through incentives and disincentives, encourage the green lifestyle so that 80% of households will know environmentally responsible behavior and apply it in every day life.

This article was originally written and published by Loren Bell, a Mongabay-Indonesia correspondent for news.mongabay.com. To see the original article and for more information, please click HERE.