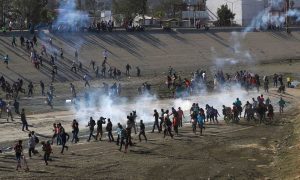 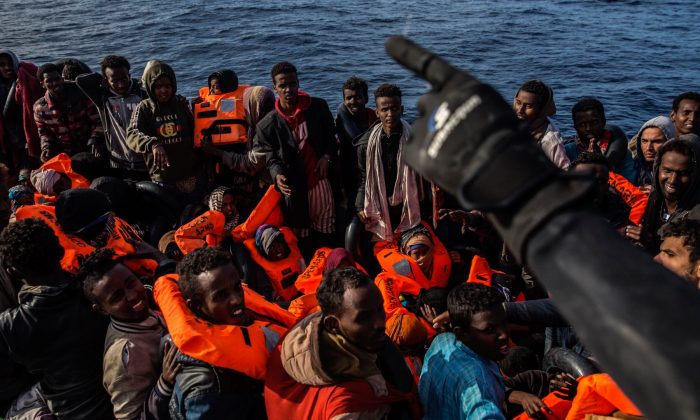 BARCELONA, Spain—Spain’s Foreign Ministry gave permission on Dec. 22, to an aid boat carrying 311 rescued migrants to set course for Spain after Italy and other Mediterranean countries did not answer its request to dock.

The Spanish aid group Proactiva Open Arms said its ship now has permission to enter the Spanish port of Algeciras.

Proactiva founder Oscar Camps said among the rescued were a woman and newborn child.

“She gave birth two days ago on a beach in Libia,” Camps tweeted. “They spent almost 24h at sea until we rescued them.”

‘The Fun Is Over’

Italian Deputy Prime Minister Matteo Salvini underscored Italy’s refusal to permit the ship’s entry by lashing out at those that profit from the migrant flows to Europe—human traffickers.

“My answer is clear: Italian ports are closed!” Salvini tweeted. “For the traffickers of human beings and for those who help them, the fun is over.”

UN Secretary-General Antonio Guterres said earlier this year, on the occasion of the publication of the Global Study on Smuggling of Migrants 2018, that migrant smuggling is a “crime that knows no borders.”

Guterres tweeted, “At least 2.5 million migrants were smuggled in 2016, generating up to US$7 billion for smugglers. The entire world is affected.”

“Refugees are especially vulnerable as they typically move under desperate situations,” Benjamin Smith, Southeast Asian program coordinator for the UN Office on Drugs and Crime told CNBC. “This creates a situation where transnational crime organizations can come in and take advantage of them through exploitation or trafficking.”

About 1 million migrants entered the European Union just in 2015, with nine out of 10 of them paying smugglers to help them cross borders, according to a joint report by the Interpol and Europol. Most paid 3,000-6,000 euros ($3,400-$6,800), so the average turnover was likely between $5 billion and $6 billion, the report said.

Many unaccompanied minors are also sold into slavery or forced into prostitution.

Smuggling is at the heart of the criminal enterprises surrounding global refugee crises.

“In the absence of legal channels, boat smugglers remain the only alternative. These smugglers practically have a monopoly on transporting people across the Mediterranean,” said Pal Nesse, senior advisor at the Norwegian Refugee Council, according to CNBC.

The boat belonging to Proactiva Open Arms picked up a total of 313 migrants Friday in waters near Libya.

Two of the migrants—a mother and child— were subsequently airlifted by rescuers and taken to a hospital.

Camps commented the helicopter rescue in a tweet, “In the end, we evacuated Sam and his mother Sali to a hospital in Malta today.”

‘We Have a Safe Port’

The Spanish coastguard “due to the refusal or lack of response from the nearest ports, has authorised (the ship’s) movement to Spanish territorial waters”, a government statement said, according to The National.

Permission was granted for the “Open Arms” ship to dock in the Spanish port of Algeciras. On its Twitter account, Proactiva said “it will be many and difficult days sailing, but we have a safe port.”

In June, Italy and Malta denied entrance to another aid ship belonging to SOS Mediterranee Sea and Doctors Without Borders that was carrying over 600 rescued migrants. Spain granted it entry to end its weeklong saga at sea.

According to the U.N. refugee agency, over 2,200 migrants have died trying to cross the Mediterranean Sea this year in unseaworthy smugglers’ boats and 117,540 migrants have reached Europe.