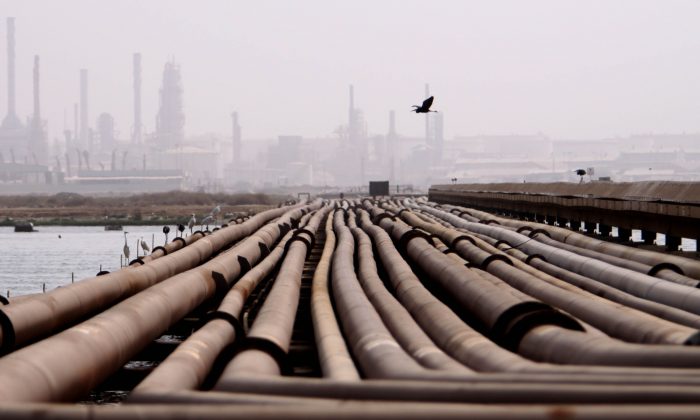 Oil pipelines on a hot, humid day near a refinery in Sitra, Bahrain, in the Persian Gulf, on Aug. 19, 2009. (AP Photo/Hasan Jamali)
Business

When negotiations in Doha, Qatar, between some of the world’s largest petroleum producers failed to deliver an expected freeze of oil production, markets responded in a surprising fashion: The price of oil rallied, hitting its highest point of the year.

Part of the price increase was driven by news of a strike among oil workers in Kuwait, now settled, which threatened to temporarily restrict supply. But the main conclusion to draw from the oil market’s counterintuitive response to the failure to freeze oil production is that the world’s largest oil exporters, including the OPEC cartel, have far less control over price trends than they once did.

More than at any time in decades, the world oil market is competitive, and no single producer can exert a significant effect on prices.

More than at any time in decades, the world oil market is competitive, and no single producer can exert a significant effect on prices.

The power of Organization of Petroleum Exporting Countries (OPEC) over world oil prices was first demonstrated in October 1973 when Saudi Arabia led other members in cutting off oil supply to the United States and its allies in protest over Washington’s Middle East policies in support of Israel. The price of oil quickly quadrupled, increasing from $3 to nearly $12 dollars per barrel, and remained high despite consumers’ efforts to adapt.

Many Western countries adopted rationing policies, leading to shortages and long lines at gas pumps. Japan, which was particularly dependent on oil imports, tacked toward the Arab States on foreign policy questions in an attempt to ensure reliable oil supply.

Across the world, higher oil prices caused a jump in inflation. Developing countries that imported oil were worst hit, as many had to borrow money to pay higher import bills and eventually suffered debt crises.

The 1970s confirmed that oil was a producers’ market, in which the largest producers had broad influence on the course of prices by adjusting production policies.

But after the initial shock, the reality was more complicated, and the main problem was cheating. If the alliance agreed to cut production, smaller members like Ecuador and Gabon faced little downside in claiming compliance while continuing to produce at high levels.

Saudi Arabia, the alliance’s largest producer, feared—correctly—that it was bearing the costs of cheating, as it lost market share to countries that were its alleged partners.

In the early 1980s, for example, OPEC countries, agreed to cut production to keep prices high. But though Saudi production fell from 10,000 barrels per day in 1980 to half that by 1985, other OPEC countries did not comply.

Algeria, for example, kept production constant, while Iran increased its output. Saudi Arabia watched as its share of OPEC’s overall production declined and other ostensible partners seized market share. Feeling cheated, the Saudis hiked production, causing prices to fall by more than half between 1984 and 1986.

Saudis have been wary of production cuts lest they bear the costs and rivals like Iran receive the benefits.

Since that experience, the Saudis have been wary of production cuts lest they bear the costs and rivals receive the benefits.

Today, OPEC continues to include major producers such as Saudi Arabia, Iraq, Iran, and Nigeria, which combined produce a bit less than half of the world’s oil. But two of the largest producers, Russia and the United States, remain outside of the cartel.

Dark Predictions About North Sea Oil Look All Too Believable

America has been a major driver of oil markets in recent years, as its production almost doubled between 2008 and 2015, thanks to the shale boom. Now, the United States produces only slightly less than Saudi Arabia.

Yet unlike Saudi Arabia, whose Aramco monopoly controls the entire industry, oil in the United States is produced by many different companies, prohibited by law from participating in cartels.

As U.S. production increased in recent years, world prices fell from over $100 per barrel as recently as mid-2014 to less than half that level today.

Trying to bolster oil prices, many industry executives advocated for cooperation from Russia and OPEC.

The oil-price slump has put financial pressure on oil producers across the world, from Venezuela to Malaysia to Kazakhstan. Russia, currently the world’s largest producer, was particularly hard hit.

Over the past year, many officials and industry executives began advocating for cooperation between Russia and OPEC in an attempt to bolster prices.

For a time, a deal between Russia and OPEC seemed like a real possibility. Russia is not an OPEC member, but it sent delegates to participate in talks with the group.

All of the countries involved were hurting financially and contended that prices had fallen far too low, and such a deal did not have to be particularly ambitious.

Rather than seeking to cut production, representatives from OPEC and Russia were only discussing a freeze at the January 2016 production level, hardly a drastic move given how far prices had fallen.

Until the day before delegates met in Doha on April 17, it appeared that they were headed for a deal. But then Mohammed bin Salman, the deputy crown prince of Saudi Arabia and leader of the country’s ambitious program of reforms, declared that his country would not freeze production unless Iran did, too.

In part, Saudi concern was due to the long history of OPEC members cheating on deals. Riyadh does not want other countries, particularly Iran, Saudi Arabia’s greatest geopolitical rival, to benefit at the expense of Saudi market share.

The two powers are currently engaged in proxy wars in Syria and Yemen. Each sees the other as threatening not only its regional interests but also its domestic legitimacy. The Saudis did not want an oil freeze deal without Iran.

Iran, however, is in no mood for a production freeze with its oil industry, emerging from international sanctions that were imposed on the country in response to its nuclear program.

Iran’s oil output has increased by a quarter since the beginning of the year, and will likely rise further over the next several months. A production freeze at January levels would therefore cost Tehran billions of dollars.

Because of this, Iran refused to participate, the Saudis refused to freeze, and the OPEC-Russia deal fell apart.

In reality, the drama over OPEC negotiations is a sideshow to the real story in global oil markets. Continued strength of production has made the United States the swing producer. Even if Iran, Saudi Arabia, and Russia had agreed to a deal, a significant effect on prices is unlikely because private producers in the United States have room to expand production if prices rise.

Green energy policies are reducing oil usage, especially in Japan and many countries in Western Europe.

American oil production has already fallen slightly from its 2015 peak, as low prices made some fields unprofitable. But if Russia and Middle Eastern producers cut their production, driving prices higher, more U.S. shale would be profitable. As production increases in the United States, that again drives oil prices downward.

On top of that, green energy policies are reducing oil usage, especially in Japan and many countries in Western Europe. Even countries such as China and the United States, where oil consumption is still increasing, are posting lower growth rates, thanks to factors such as ever-cheaper solar power to meet climate-change targets.

On top of that, many developing countries have taken advantage of the oil price slump to cut government subsidies for energy consumption, which will reduce demand growth in the future.

Price volatility in recent years suggests that it is dangerous to try predicting the price of oil over the next several years. But the failure of the Russia-OPEC deal and the rise of U.S. shale production suggests that the days of coordinated production cuts may be behind us. OPEC is no longer a dominant force in global oil markets.