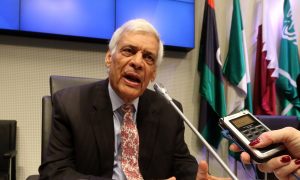 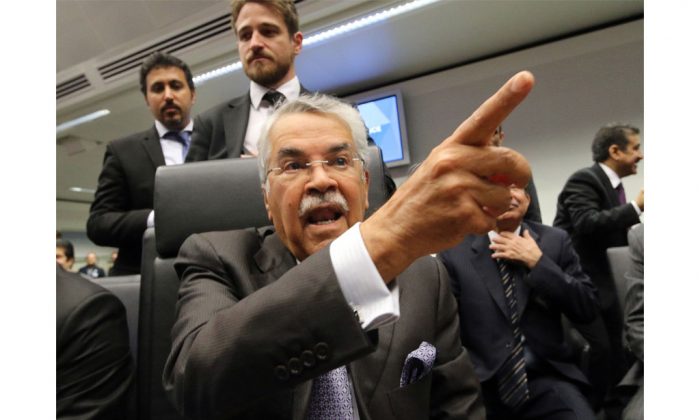 Saudi Arabia's Minister of Petroleum and Mineral Resources Ali Ibrahim Naimi at a meeting of the Organization of the Petroleum Exporting Countries, OPEC, in Vienna, Austria, on Thursday. (Ronald Zak/AP)
Business

The move, which shook the oil market wasn’t a move at all. On Thursday OPEC decided to keep production steady, consciously accepting much lower prices.

Even though the decision was largely expected, it showed that the once-powerful cartel is losing the power to dictate the price of oil as it pleases. It also reflects deep divisions within the group made up of the world’s largest oil producers except Russia.

The move to maintain a production target of 30 million barrels a day appeared to reflect acceptance of the Saudi view within OPEC that short-term pain had to be accepted for later gain.

The Saudis and their Gulf allies hope to put economic pressure on rival producers in the United States, especially shale players, which need higher prices to break even. In the long term, this could help reaffirm OPEC’s dominance of the oil market as weaker and leveraged players are being washed out of the market.

Goldman Sachs estimates most shale players lose money at a price below $75. In addition, they are highly in debt and need to generate positive cash flows to keep servicing their debt.

That’s good news for American consumers as gas prices have already declined 10 percent this year and should decline more. However, if the Saudi’s plan plays out, there will be less production in the long term as marginal producers go bankrupt. Therefore higher gas prices should again be in the cards down the road.

It would not be the first time this happened. After the price of oil spiked of the 1970s, the Saudis pushed down oil in 1986 to stifle renascent U.S. production. “[It] was the big price collapse and the industry did not see it coming,” Michael Lynch, president of Strategic Energy and Economic Research, who has covered the oil sector for 37 years told Bloomberg. “It put a lot of them out of business. You just don’t forget it. It’s part of the cultural memory.”

Keeping the price low also serves to keep Russia in check, which generally feels comfortable at a price of $100. As a consequence, the ruble lost another 3.6 percent in trading Thursday and is now down 44 percent against the dollar this year. The Russian finance minister estimated the total loss of revenue for Russia at $100 billion—and that was before Thursday’s decline.

While Saudi Arabia can maintain production at prices far below $70, other OPEC members such as Venezuela and Iran need a price far above $100 to balance their fiscal budgets. They are looking to maximize revenue in the short term and don’t want to deal with competition from U.S. shale at this moment.

This is why Venezuelan President Nicolas Maduro wants to forge an alliance against the decline in the oil price, which could include Russia.

The International Monetary Fund said Venezuela needs to sell oil at around $120 a barrel to avoid the threat of national bankruptcy. Bank of America estimates that for every dollar that oil prices drop, the state loses $770 million in net revenue over the course of a year. That puts revenue of $12 billion a year below peak levels even if current prices don’t fall further.

If sanctions were to be lifted as part of a nuclear agreement with Iran next year, it still would need prices close to $140 a barrel to finance the government budget. Crude export revenues finance more than 50 percent of the government’s outlays.

Iranian Oil Minister Bijan Namdar Zangeneh said the “OPEC decision was not entirely what we wanted,” and analysts suggested that others share that view.

Oil ministers had come to Thursday’s meeting facing two unpalatable choices: Cut their production from 30 million barrels a day in an effort to boost prices and see OPEC’s market share fall, or do nothing in hopes of riding out the crisis.

Paring output may not have been very effective because supply from non-OPEC countries, like the United States, remains high. Also, discipline within the 12-member organization is lax and overproduction by some members would have cut into the effectiveness of any production cut.

Despite the tensions, OPEC Secretary General Abdullah Al-Badry suggested all members were on board with the decision to stick to the present output level, telling reporters “the ministers are happy.”

“I see no nagging from consumers, no nagging from producers,” he told reporters. According to reports, Venezuelan Foreign Minister Rafael Ramírez was less sanguine and stormed out of the meeting red-faced, according to some reports.

“When it comes to the raw decision making that is left to the unofficial leader, Saudi Arabia,” said Alfa Energy Chairman John Hall.

Accounting for about a third of OPEC output, the Saudis can weather lower prices because their coffers are well-padded and its production costs are relatively low.