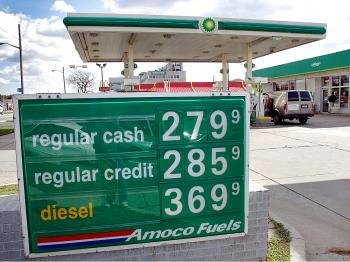 The cash price for regular unleaded gas for $2.79 is displayed at a BP station October 17, 2008 in Royal Oak, Michigan. (Bill Pugliano/Getty Images)
Business

By Antonio Perez
biggersmaller
Print
Oil prices rose on Friday from 14-month lows, on the heels of an OPEC announcement calling for an emergency meeting next week and possible supply cuts to stem a rapid decline in crude oil prices.

A steady drop of $40 in crude oil prices during the last four weeks alarmed OPEC cartel officials and energy companies. The meeting of OPEC countries next Friday may prompt production cuts in the coming months, analysts say.

A dip in crude oil—and subsequent drops in gasoline price—would undeniably help consumers this year. Already cash strapped by higher unemployment rates, the credit freeze, and a decline in stock market value, spending less to fill up the gas tank and to heat homes give consumers reason to cheer.

According to latest data from AAA, cost per gallon of regular gasoline averaged around $3.04 in the United States. That’s more than 20 percent lower than the price of $3.86 a month ago. Highest price on record was $4.11 per gallon, on July 17.

The Organization of Petroleum Exporting Countries (OPEC) and oil companies say that sudden drops in energy prices affect profits and could curtail energy and oil exploration. With some analysts expecting oil to decline to around the $50 price point, energy companies may slash investments and limit production to drive up prices.

OPEC members lose a total of $1 billion of revenues per day since prices peaked in mid-July, according to a London Times report.

The cartel originally planned the meet for mid-November, but recent drops in oil prices forced members to push up the date. If members decide to cut production, oil prices would likely climb up in the coming months, despite projected declines in demand.

Reports show that OPEC has already started to restrict oil supply in recent months. A Platts survey of OPEC and industry officials from earlier this month shows that OPEC’s September production is down on average 340,000 barrels per day from August.

The decline in oil demand is due to the recent global economic downturn. Asian countries reported the largest drop in petroleum demand.

With oil companies and OPEC cartel members taking in billions in profits over the past few years, many consumers and Internet bloggers are up in arms over recent news of possible production cuts to drive up prices.

“Let (OPEC) cut production to raise the price of oil, let the prices skyrocket … The sooner it hits a point where the global economy crashes, the sooner we will develop renewable sources to cut them off completely,” said one blogger on the Times website.

“Should the cartel be successful in forcing prices up, risks to the global economy will increase,” said Mike Shedlock, on his blog Global Economic Trend Analysis. “The last thing the world needs right now is a supply shock in oil and/or artificially high prices.”

Together, OPEC controls about 40 percent of the world’s oil supply.